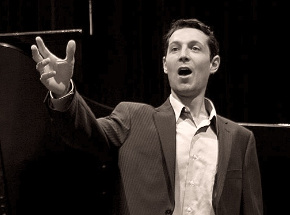 The last Songmasters concert of the season featured a selection of works that sorta kinda had a Finnish or Hungarian connection.  The first part of the prgram featured songs by Sibelius, all but one to Swedish texts, and piano pieces by Selim Palmgren, whose music sounds like a sort of cross between Debussy and Sibelius.  The songs were sung Stephen Hegedus with plenty of power and quite a bit of subtlety.  We had been told he was quite ill but one wouldn’t have known it.  Fine, delicate work at the piano by Robert Kortgaard.

Next up was Brahms.  First the Hungarian Dance no. 15 with Rachel Andrist joining Robert at the piano.  I always seem to find four hand pieces fun.  Then Leslie Ann Bradley joined Rachel for the Zigeunerlieder.  I’m not sure what Brahms’ audience thought Hungarian or Gypsy music sounded like but I doubt it was mildly exoticised Schubert.  Which is what the Zigeunerlieder sound like.  In any event they were beautifully sung.  Leslie Ann has quite a powerful voice but it stays quite sweet in the upper register where so many voices turn a bit metallic.

After the interval we got settings of Victor Hugo by Liszt sung by Leslie Ann with Rachel accompanying.  These were really lovely and fitted Leslie Ann’s voice beautifully.  Then Erika Raum on violin joined Rachel for Bartók’s Six Romanian Folk Dances.  Musically this was one of the high points of the afternoon with the pieces exploring some interesting variations in tonality, harmony and rhythm.  Then came the piece that had really brought me out, Saariaho’s Changing Light for voice and violin.  It’s a setting of an English language text by Rabbi Jules Harlow about Creation and it’s beautiful.  The style is more the Saariaho of L’Amour de Loin than, say, From the Grammar of Dreams.  It’s ethereally beautiful; the kind of music that lifts you out of the here and now, and Leslie Ann and Erika combined gorgeously to realise it.

The final set reunited Robert and Stephen in a spirited account of some of Kodály’s settings of Hungarian folk songs.  Wonder of wonders, these actually sound like Hungarian folk song settings!  And sung in magyar by someone who speaks it!  Both musicians were inside the idiom and it made for an invigorating finish to a rather curious but ultimately satisfying concert.

We got a sneak preview of next season too.  I couldn’t write fast enough to get all the details which will come out when the RCM announces its full season in June but there will be three concerts: