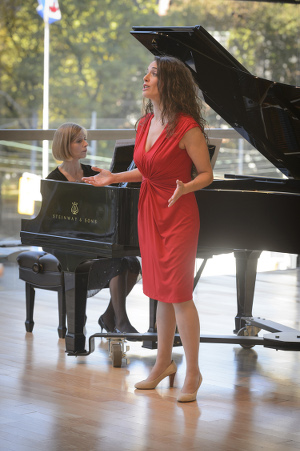 Today’s lunchtime concert in the RBA was given by mezzo-soprano Lauren Segal and bass-baritone Robert Gleadow with Sandra Horst at the piano.  The programme was titled Gypsy Songs, Travel Songs.  First up was Robert, who looks considerable less rakish without a beard, with three songs from Vaughan Williams’ Songs of Travel.  All three; The Roadside Fire, Bright is the Ring of Words and Whither Must I Wander are familiar recital fare but sung as well as this are a joy to hear.  Gleadow has a big, full sound with quite a range of colour but he can also float very beautiful high notes.  It was very impressive.

Lauren came next with Dvorák’s Cigánské melodie.  These songs cover a wide range of moods, all vividly captured by Segal.  Her voice is dark toned and very mezzo; no soprano 2 here!  Onewould think her perfectly suited for gloomy Slavic rep until, as she did later, she cut loose on de Falla’s Siete canciones populares Españolas.  Here she was every bit the dark eyed Spaniard singing with fiery passion of love and loss.  Both sets ended with fierce, bravura numbers brought off with panache.  The lady knows how to work a crowd!

In between Lauren’s two sets Robert was back with the Ibert Don Quichotte songs.  This too was impressive.  The first song, Chanson du départ de Don Quichotte, has a cruelly low, slow section (it was written for Chaliapin) which was skillfully navigated by Gleadow (I do sometimes wonder if he isn’t closer to a true bass than a bass-baritone).  He also sang the final number, Chanson de la mort de Don Quichotte, very beautifully indeed.

The inevitable encore happened.  We were promised a “Spanish theme” and after about three notes from the piano i realised we were heading into Là ci darem la mano.  Now a Robert Gleadow Don Giovanni is quite high on my opera bucket list so I was very keen to see and hear this.  Beard or no beard Robert is a dangerously rakeish Don and while one might not think of Ms. Segal as a natural Zerlina she was very good and very sexy.  Also I’m not sure how any lady can maintain her cool when roguish Mr. Gleadow’s hands are where they were.  It must be one of the things they teach in the Ensemble Studio.

Last but not least, Sandra Horst, the conductor, chorusmaster, pianist who packs more musicality per kilo than just about anyone.  She was the perfect accompanist spanning the multiple moods and idioms with aplomb. 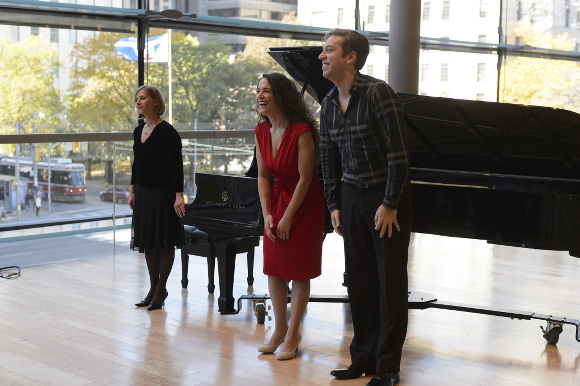