John Adams’ El Niño was conceived as an oratorio but thoughts turned to it being staged early in the creative process.  The final result, as staged at Paris’ Châtelet in 2000, defies easy characterization.  There are singers and dancers on stage but they don’t represent unique characters.  So, for example, at one moment Willard White is Herod and at another Joseph.  To further complicate matters video is constantly projected onto a screen above the stage space.  It was specially created for the piece being shot on location in Super 8.  There’s no clear narrative either.  To some extent it tells the Christmas story but it’s at least as much about the feminine experience of giving birth as anything from Isiah or the Gospels.  It also uses a very eclectic mix of texts; from the Bible, from the Apocrypha, from female Latin American poets, from Hildegard of Bingen and so on.  There are lots off Sellars’ trademarks in the staging too; semaphore and so on.  Does it work?  I don’t really know as it’s really hard to tell from the video recording (see para 3). 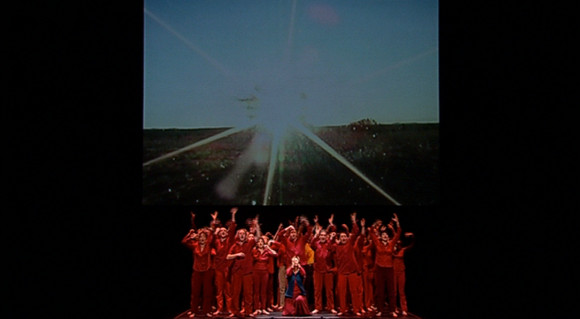 Musically it’s very fine.  At least John Adams fans, of which I am one, will think so.  The orchestration includes guitar and sampling keyboard and the music has that rhythmic thrust and inventiveness that characterises Adams.  The vocal forces incude, chorus, children’s chorus and an ensemble of three countertenors plus soprano, mezzo and baritone soloists which gives Adams a really interesting palette to work with and one he uses with great imagination.  The solists are long time collaborators Dawn Upshaw, Lorraine Hunt-Lieberson and Willard White.  All give excellent, thorougly committed performances and White’s tonal colours in particular, seem absolutely ideal for the music.  Kent Nagano, a student and long time collaborator of Adams, conducts the Deutsches Symphonie Orchester Berlin with predictable assurance.

The trouble is, excellent as the performances are and interesting as much of the staging seems to be it just doesn’t work as a film or video.  Peter Maniura is responsible for that side of things and he tries to pull off a conventional video.  It’s a mix of full stage shots including the projection, what’s going on under the screen and close ups of various degrees with a fair amount of just the Super 8 video.  I don’t think it works.  The constant switching from the brightly lit, brightly coloured stage, filmed in high DVD quality, to washed out grainy Super 8 is too jarring.  Also, it means 95% of the time we are missing at least half of what the theatre audience saw.  I don’t think Maniura is being willful.  It’s extremely hard to film video effectively and I have no idea what approach might have worked.

The picture, when it’s not Super 8, is excellent and the Dolby surround sound does justice to the score.  There’s also a really good bonus track with interviews with Adams, Sellars, Nagano and Upshaw.  It’s one of the best features of its type that I’ve seen with really interesting comments from Adams on his composing process and on how he became the composer he is.  I could listen to Adams and Sellars talk about their work for hours (indeed I have) so maybe I’m biased but this is really good.  The booklet contains an essay and a track listing.  Subtitle options are English, German, French and Spanish.

I really wished this worked as a film but it doesn’t.  Still, the DVD is cheaper than the CD recording with the same cast so if you want to hear this work, and you should, you might as well buy the DVD and decide for yourself.