There was no doubt that the Four Seasons Centre was the place to be at noon today.  Few opera fans would willingly miss a free recital by Sir Thomas Allen and I doubt that anyone who attended was disappointed.  Perhaps the voice doesn’t have the bloom it had twenty years ago but it’s still exceptionally fine and the craftsmanship and sheer stage presence was little short of amazing.  Above all, perhaps, it’s the humanity of the man that shone through for the hour and a bit he entertained us.

The program, dubbed Songs of the Sea, started with three settings by Haydn of English language texts.  Apparently there are hundreds of these, at least if Burns is considered to have written in English.  Who knew?  Actually they were quite varied with a wide emotional range and characteristically inventive music.  They were also beautifully sung and brilliantly accompanied by Rachel Andrist.  These were followed by four more or less watery Schubert songs that were, well, Schubertian.  They were sung and played in a thoroughly idiomatic and effective way. 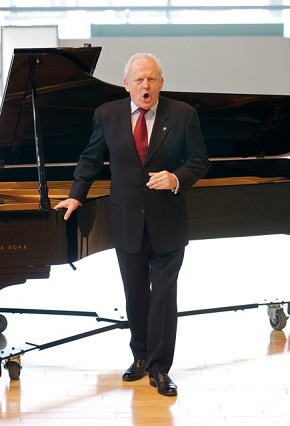 The first half of the program being dominated by Germany we switched to Britain in the second half.  Indeed, Britten mostly.  First up was Look! Through the port comes the moonshine astray!  It’s Billy Budd’s meditation in the hours immediately before his hanging and is Britten at his most simply touching.  I know how much this role means to Sir Thomas, though it must be a while since he sang it on stage, and the decades that must have gone into thinking about this piece were almost painfully apparent.  Too moving to write about really.

The set of four Britten folk songs that followed had the traditional Durham mining song Rap er te bank interpolated.  I suspect, despite Sir Thomas singing this in perhaps the most refined accent I have ever heard it sung in, that few in the audience understood it (myself and the Durham grad to my left excepted!).  Maybe, like the German texts, a translation should have been handed out.  The Britten songs were very well done  with a particularly fine The Bonny Earl o’ Moray (must check if Britten set the third verse because I don’t think it was sung) and a wicked funny Foggy, Foggy Dew.

The final set featured “parlour ballads” from Eric Coates and Arthur Penn.  Not really my thing but very well done.  The inevitable first standing ovation brought Sir Thomas and Rachel back for Vaughan-Williams’ setting of Ralph Barnes’ Linden Lea.  Not only is this one of my favourite art songs but it features on my all time favourite recital disk On the Idle Hill of Summer featuring, you guessed it, Sir Thomas Allen (albeit a slightly younger version).  That produced another standing ovation and, inevitably, a second encore.  This time it was a truly hilarious rendition of Cole Porter’s Miss Otis regrets.  Now Lady Whiteadder might consider two hangings in one recital to be an “indulgence’ but nobody at Queen and University seemed to care.

Definitely up amongst the very best recitals I’ve heard in the lunchtime concert series.

2 thoughts on “A reet canny lad”