What follows, eventually, is a review of the Blu-ray recording of Busoni’s Doktor Faust recorded at the Opernhaus Zürich in 2008.  First I feel the need to digress somewhat about the work itself.

What is it about then?  It’s a take on some of the Faust material that Goethe didn’t use (though Busoni can’t quite free himself from the master).  In the prologue we see Faust as Rector Magnificus of some unnamed university being given a magic book by “three students from Krakow”.  He uses it to summon six spirits of whom only Mephistopheles impresses.  He offers Faust a deal.  He will serve Faust until his death but then Faust must serve him for ever.  Faust realises that this a rotten deal but shown that his creditors and, worse, the church authorities are after him he signs up.  There’s then a scene in which Gretchen’s brother is praying for vengeance in a chapel.  Mephistopheles engineers his death.  Obviously this is part of Faust’s back story but dramatically it’s completely superfluous.

In the main action Faust uses a series of illusory images to seduce the (to be) Duchess of Parma on her wedding day.  He gets her pregnant then abandons her.  In the next scene Faust is drinking with some disputatious Protestant and Catholic students.  Mephistopheles comes in with the body of the dead child and recites the story to the students.  Mephistopheles turns the body to a bundle of straw and lights it.  Out of the ashes a vision of Helen of Troy emerges.  Faust tries to embrace it but can’t.  In the final scene the “three students from Krakow” demand the return of the book and announce that Faust will die at midnight.  Faust meets a beggar woman with a dead child in the street (guess who?).  Faust uses his last effort of Will to transfer his life force to the dead child.  Helen of Troy appears here too.

There are further problems with the work.  Busoni worked on it for years but never finished it.  In particular he didn’t compose the music for the ending or the Helen of Troy scene.  A modern performance has two options.  There’s a completion by Busoni’s student Jarnach which was used at the premier or there’s a version by Anthony Beaumont based on Busoni’s own sketches.  I guess scholars tend to prefer the latter but I think there’s a case for saying that if Busoni was unable to write the key music in the piece to his own satisfaction then there’s no compelling argument for basing it on his, failed, sketches.  In any event, the Zürich recording uses Jarnach.  The music itself is somewhat eclectic but cleaves mainly to a sort of high Romantic genre with elements of minimalism.  Modern opera goers will have few difficulties with it.

What then of the Zürich production?  It’s very much a team effort by three people who obviously believe in the power of the piece.  They are director Klaus Michael Grüber, conductor Philippe Jordan and Thomas Hampson who sings the title role.  Hampson and Jordan make the case for the work and their performing choices in a couple of rather good interviews that form the bonus material on the disk.  Hampson’s German and his scholarship are impressive. 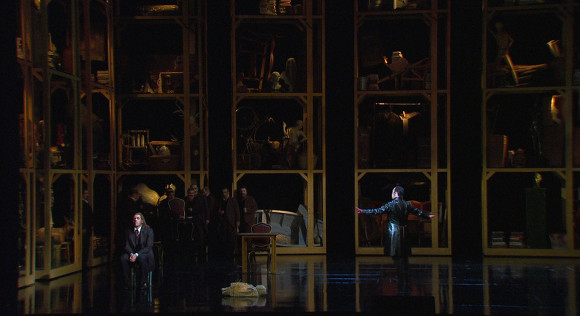 It’s quite a static piece and Grüber deals with this mostly by contrasting rather elaborate costuming with simple, elegant backdrops and imaginative lighting.  In places it’s really quite spectacular, especially during the Parma wedding scene.  This works pretty well and focusses the action on the characters which is fine as there are strong performances from both Hampson and Gregory Kunde as Mephistopheles.  They get good support from Günther Groissböck as Faust’s sidekick and Sandra Trattnigg as the duchess.  Jordan makes a pretty good case for the music with the support of the ever excellent Zürich orchestra and chorus.  In short, I think the work is presented about as well as it could be.

Technically it’s a very good package.  Felix Breisach’s video direction is judicious and respects the picture Grüber is trying to create.  This is especially apparent during the apparitions scene.  The picture is full HD and just fine.  The DTS 7.1 sound is clear and open and much better than the stereo alternative.  The booklet has an unusually long and informative essay as well as full track listings and the 40 minutes plus of interviews have already been mentioned.  Subtitle options are German, English, French, Spanish and Italian.

So, I’m not sure this work is the masterpiece its advocates claim but it is interesting and the performance and recording are first rate.

2 thoughts on “An eternal will”