Yesterday’s free concert in the Richard Bradshaw Amphitheatre featured three members of the Ensemble Studio singing 20th century English language songs.  The concert opened and closed with Vaughan Williams.  Baritone Clarence Frazer gave us five songs from Songs of Travel (texts by Robert Louis Stevenson) and Cameron McPhail sang three songs from The House of Life (texts by Dante Gabriel Rossetti).  These are some of my favourites and I must have almost worn out my CD of Thomas Allen singing them (On the Idle Hill of Summer on Virgin Classics).  So, I don’t know whether that made me more or less critical but I thoroughly enjoyed both performances.  Clarence sang strongly, straightforwardly and with very fine diction while Cam was more overtly emotional.  Both approaches worked.

The meat in the sandwich was Claire de Sévigné with three songs from André Previn’s Honey and Rue (texts by Toni Morrison).  These are interesting and difficult pieces; mixing atonal elements with jazz and blues derived lines and a nod to spirituals in Take My Mother Home.  The second number, Do You Know Him? was sung unaccompanied as well.  Not by any means an easy sing but handled with great skill by Miss de Sévigné.  Accompaniment throughout was from the very impressive Michael Shannon who also introduced the works. 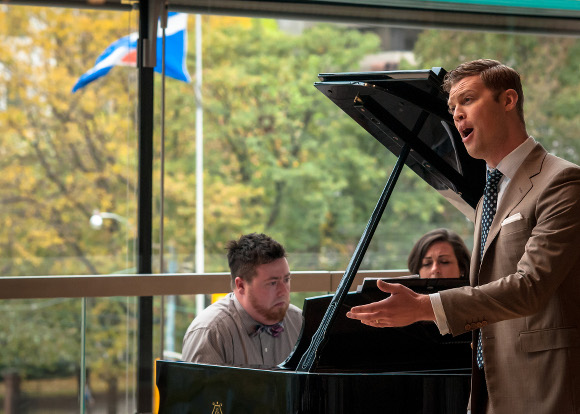 All photos by Tim Flynn