Richard Eyre’s production of La Traviata at the Royal Opera House, filmed in 2009, is a pretty good example of how to do a traditional production.  There’s nothing conceptual or thought provoking to it but the direction is careful and tells the story clearly and well.  The designs are mid 19th century with crinolines and tail coats but with the odd imaginative touch and a welcome refusal to succumb to the “more stuff” syndrome that plagues so many Verdi and Puccini productions.  Backed up by excellent music making it probably makes a near ideal introduction to the piece, even if it won’t entirely displace Willy Decker’s brilliant and disturbing Salzburg production in my affections.

Act 1 is set in a circular room with a sort of golden boy figure at centre.  It’s atmospherically lit, perhaps aiming for a sort of gas light effect.  It’s quite striking but it can’t have made it easy to film.  Renée Fleming, as Violetta, makes quite an impression.  There’s something almost unbalanced about her acting (in a good way) that completely belies the Fleming who can only stand there and look goofily pretty.  She also makes a pretty good fist of the coloratura passages which are, for her, probably the least comfortable parts of the role.  We also get our first look at Joseph Calleja as Alfredo .  He seems just right for the role with decent acting and just the right weight of voice. 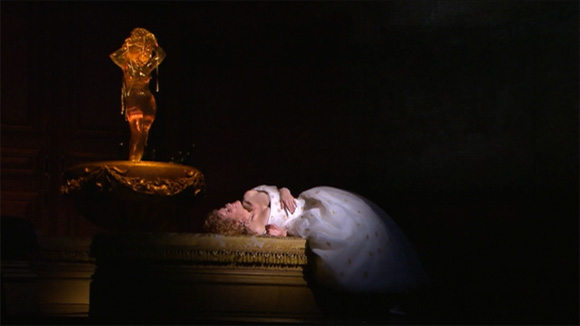 Act 2 Scene 2 is set in a recognisably rural room but with urban treasures stacked against the wall.  The key interactions between Thomas Hampson’s Germont père, looking like a dyspeptic undertaker, and Fleming are strongly characterised and very well sung.  We are in more lyric/dramatic territory here and it showcases Fleming’s voice very well.  In the next scene we are back in “gas lit” Paris.  The gypsy and matador scenes are played quite straight and the heat goes off a bit before Calleja brings things back to the boil with a fine performance as the spurned lover.  Hampson too is quite chilling in his denunciation of his son’s behaviour.

For Act 3 we have the canonical garret but there’s an unusual amount of blood around.  No squeamishness from Eyre here.  I’ve seen Lucias with less blood on them.  Fleming manages to switch gears again very well and really conveys the fragility of the dying Violetta.  The sense of doom is highlighted by the carnival being represented by giant shadows on Violetta’s windows.  The final trio is very affecting and Fleming pulls the death scene off very well.  Tony Pappano conducts a really searching and sympathetic account of the score and he’s well backed up by the orchestra, chorus and all the cast.  It’s really hard to find fault with anything much.

Rhodri Huw’s video direction is exemplary.  despite the tricky lighting he’s prepared to show us all the action when it counts.  It helps that this was filmed in HD (there’s a 1080i Blu-ray available) and even on regular DVD that results in a very good picture.  He uses no more gimmicks than Eyre and just shows us the show in a clear fashion.  The sound is excellent DTS 5.1 and decidedly more three dimensional than many other nominally surround sound recordings.  (LPCM stereo is also available).  There are English, Italian, Spanish, German and French subtitles.  The bonus material consists of a cast gallery and a very good interview between Pappano and Fleming which I’d recommend to anyone interested in singing technique.