Last night saw the annual main stage performance by the COC’s young artist programme, the Ensemble Studio.  This year it was Handel’s Semele in the production which I saw a couple of weeks ago.  The main roles were cast from the Ensemble Studio with the the exception of the countertenor role of Athamas which was played by Ryan Belongie, an Adler Fellow.  The title role was split with Mireille Asselin singing the first two acts and Ambur Braid coming in for the third act.  This seemed like a sensible solution given the size of the role and the two singers’ strengths.

I found seeing the production for a second time allowed me to focus more on the performances and not get distracted by the sillier directorial quirks.  I think it also helped that I was higher up in the house for this performance which showed the production to better advantage.  I did enjoy it more than the first time around and I think that if conductor Rinaldo Alessandrini (and many others) had his way about reinstating the final chorus it would be on its way to being a rather good production! 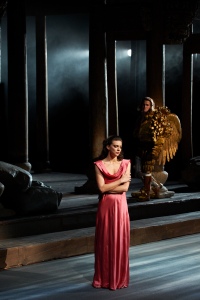 As to the performances, there were lots of things to enjoy.  Rihab Chaieb was outstanding as Ino/Juno; lovely singing with just the right touch of evil as Juno.  She got great support from Jacqueline Woodley as her sidekick Iris.  Excellent singing and some good comedic chemistry between the pair of them.  Bass-baritone Philippe Sly sang Cadmus and Somnus. He’s new to the Ensemble Studio and I’ve not seen that much of him before.  He was very good, if a little light for the role.  It’s really a true bass role and he didn’t have the tectonic low notes of Steven Humes in the main cast but it was still a very enjoyable performance.  Chris Enns sang Jupiter.  I’ve said before that he doesn’t have the most beautiful tenor voice in the world but he’s an accurate and articulate singer and a really good actor.  He sounded more engaged in the piece than his main cast rival and had much more chemistry with Semele, especially with Mireille in Act 2. He sounded more Handelian too.  Ryan Belongie was well up to his main cast equivalent though maybe a little less powerful.

So that leaves Semele.  Mireille started out a bit slowly.  Endless pleasure, endless love was a bit tentative, though I’m sure being suspended on a wire above the stage didn’t help!  She warmed up to give a very good performance indeed in the second act with a fine rendition of Oh Sleep, why dost thou leave me? and some terrific acting.  Ambur took over in the third act.  Generally she was very good with accurate and exciting coloratura and more excellent acting, especially in Myself I shall adore.  What she couldn’t quite pull off were the bravura finishes to the two big arias.  Semele is a really tough sing and Mireille and Ambur did very well without quite managing to light the house up the way Jane Archibald did.  (And that is a horribly unfair comparison). 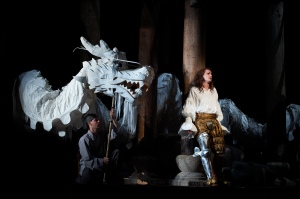 The Ensemble Studio performances are always an interesting experience.  There’s always a risk that not everything will be as slick as a main cast performance and there will always be places where one might wish for a bigger or more mature voice but there is a special level of commitment and engagement that makes for great theatre.  I think that’s helped by it being just one performance, not a run, but it’s also a function of the terrific acting skills of our young singers.  Given the pricing, I’m a bit surprised that the shows aren’t better attended.  This one certainly deserved to be.

All photographs are by Michael Cooper courtesy of the COC.  Click through for (much) larger versions.