Handel’s Tamerlano cries out for a Regie approach because it’s basically boring. The motivation of the characters is so oddly straightforward that the plot(1) seems inevitable right up until the utterly implausible ending and character development is all but impossible. Unfortunately Regie is exactly what we don’t get in the 2001 production of the work from the Halle Handel Festival.  Jonathan Miller directs and attempts to convey the story in an entirely straightforward way with the barest minimum of support.  The very small stage is furnished with a couple of screens and a chair/throne.  The brightly dressed characters (costumes by Judy Levin) basically wander about and sing.  Any drama is entirely dependent on the acting ability of the cast, which varies.  Tom Randle as Bajazet acts rather well throughout and Anna Bonitatibus is a fiery Irene (complete with a riding crop which she shows every sign of being willing to use and thus provides the obligatory Handel opera BDSM reference) but Elizabeth Norberg-Schulz as Asteria, although very easy on the eye, seems capable of no more than stock gestures from the Dummies Guide to Baroque Acting.  Graham Pushee is a bit better as Andronico but his simpering acting coupled with being a fairly “thin” counter-tenor does come off as a bit effeminate.  Maybe the worst acting of the lot comes from Monica Bacelli in the title role.  She is a sort of low energy Snidely Whiplash (with Snidely like moustache) and manages exactly one emotional register and no hint of menace from beginning to end.  The whole thing feels like a rather dull semi-staged performance.

As to the music, one has to say that the playing and singing are very good.  Everybody can do what’s needed and there are some interesting variations on the normal “voice” one hears in Handel.  Randle and Bonitatibus in particular can sound quite dramatic.  Trevor Pinnock conducts the English Concert so no problems there.  The problem is the music itself.  It’s horribly unvarying.  The first two hours plus go by in a series of reciitatives and da capo arias at what seems to be a constant andante soporifico.  The first lively number comes well after the two hour mark and is so surprising I jumped out of my chair.  It finishes a little stronger with a couple of pleasant duets and the obligatory closing ensemble but this really is not Handel at his best. 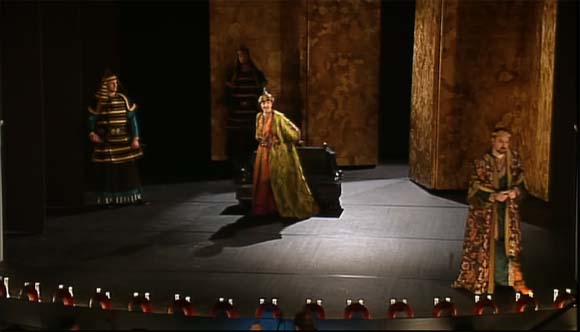 Helga Dubnyicsek is the video director.  She really doesn’t have much to work with so, for once, the succession of close ups, angle changes and dissolves seems almost a relief.  The picture is 16:9 and normal DVD quality.  The sound is Dolby 5.1 (LPCM stereo option) and is pretty decent though not as vivid as some more recent releases.  Subtitles are English, French, Spanish and Japanese.  There’s an interesting subtitle option called “Score plus”(2) which projects the score onto a faded out picture of the action.  There a couple of bonus interview features.

There is one other video version of Tamerlano available. It’s from Madrid with Placido Domingo as Bajazet and it’s available on DVD and Blu-ray from Opus Arte.  I think it will be a long time, if ever, though before I sit through this one again. 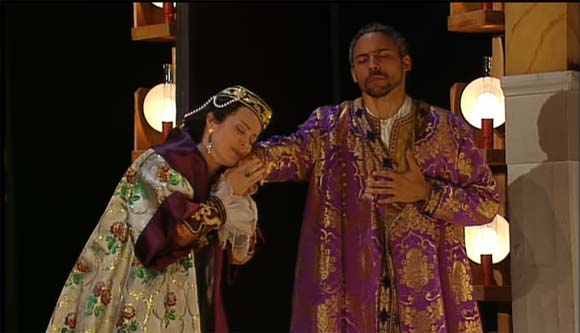 fn(1) Bajazet, formerly Ottoman emperor has been captured by the Tartar leader Tamerlane.  Bajazet hates Tamerlane unreservedly because (a) he won and (b) he sees him as a lower class usurper.  Bazajet spends most of the opera wishing he was dead but only manages to poison himself right at the end.  Bajazet has a daughter, Asteria, who hates tamerlane because that’s the filial thing to do.  Asteria is betrothed to Andronucus, a Greek client king of Tamerlane.

Tamerlane is betrothed to the Greek princess Irene but decides, for unspecified reasons, that he wants to marry Asteria instead and palm Irene off on Andronicus.  There are multiple misunderstandings as Asteria appears to go along with this while really intending to kill Tamerlane.  She makes two hamfisted attempts to do so which don’t seem to bother Tamerlane as much as attempted murder of a head of state usually does.  Finally Bazajet poisons himself which (why?) causes Tamerlane to repent.  Tamerlane marries Irene, Asteria marries Andronicus and the obligatory triumphal ensemble is sung. 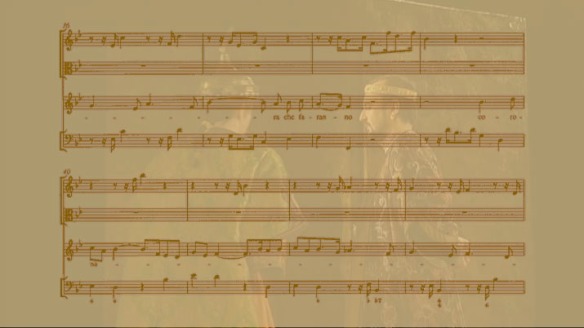