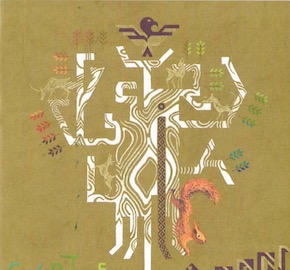 Yggdrasil is a new record by the Norwegian women’s choir Cantus conducted by Tove Ramlo-Ystad.  There are eleven works on the record by various composers and all inspired, more or less loosely. by the idea of the World Ash Tree of Norse legend.  Sometimes they are a fairly literal telling of some episode from myth, other times they explore broader ideas around a tree that lasts for a long time, but not for ever, and contains within it its own destruction and the seed of its rebirth.  So, themes of humanity and Earth’s place in the Cosmos, the destructiveness of war, greed and climate change all have their place.

The musical styles are very varied too from very simple, rather boring, melodic settings, through polyphony to more complex multi part mixes with spoken word blended with a sort of chanting and a melody line.  Just picking out a couple of tracks I really liked there’s Hirtir by Henning Sommero which uses text fragments from the Poetic Edda dealing with the four stags who browse the branches of Yggdrasil.  Here there’s whispering and a hand drum of some sort used to good effect.  In a similar vein there’s Ratatoskr by Trygve Brøske setting an English text by Alice Major.  This uses the device of the squirrel who carries messages and insults between the raven at the tree’s top and the dragon Níðhöggr who is attacking the roots.  It’s playful with plenty of hand held percussion but besides being quite funny it effectively exploits the difference between human time scales and cosmic ones.  The eleven texts are in several languages; Icelandic, Norwegian, English and Ainu.

My real reasons though for getting hold of this recording were audiophile and technology related.  It’s a two disk package.  There’s a Blu-ray disk with four different encodings and a hybrid SACD with three.  So one can play it as a standard resolution stereo CD but where’s the fun in that?  I sampled most of the formats on both headphones and using my speaker set up which has three front channels, two side speakers, one at the back and a sub-woofer but it isn’t the sort of listening room with speakers at multiple heights that some of the formats I’m going to describe are really designed for.

There are three surround mixes and a high resolution stereo mix on the Blu-ray.  The most striking over speakers was the 96kHz AURO-3D 7.1.4 mix.  This was really immersive, even on my limited set up and probably sounds amazing on something fancier.  The 48kHz Dolby Atmos 9.1.4 mix was almost as impressive.  The standard 192kHz DTS-HD-MA 5.1 (i.e. the usual opera Blu-ray surround track) was much more frontally oriented.  Over headphones the crispest, most detailed sound came from the multi-channel mix on the SACD which wasn’t nearly so spectacular on speakers.  So it’s fun to play with and recording engineer Morten Lindberg has done a wonderful job of capturing a really pure source (recorded in the Lademoen Church in Trondheim) and then finding the best way to exploit the various available sound formats.

The package comes with a booklet that has all the texts in their original language and either a translation or a summary in English.  There’s a lot more information too but much of it is in Norwegian.

I’d recommend this disk for either hard core choral music fans or audiophiles.