ARC’s production of Marius von Mayenburg’s 2012 play Martyr opened at the Aki Studio last night.  It’s presented in an English translation by Maja Zade and directed by Rob Kempson.  I think it’s more than a just a direct German to English translation.  names have been changed for instance and there are definite shifts in directorial approach from the Berlin production.  I think the best way to understand what this is all about is to start with the original German version and how it may have looked to a Berlin audience and then look at how time, space and directorial decisions may affect audience reception.

It’s clear that it’s a very German play.  There is a high degree of artificiality and absurdity and there’s really no attempt to present “realistic” human characters.  There’s also an ending which, in its way, is as absurd ,and as necessary, as the arrival of the King’s Messenger in Dreigroschen Oper and that’s all I can say about the ending without horrible spoilers!

The basic premise is that Benjamin, a teenage schoolboy, has developed a martyr complex based on a literal reading of all the wrong bits of the Old Testament and the Epistles.  I think that originally this was very closely intended to parallel Islamic fundamentalism because his obsessions are sexual segregation and the subjugation of women, homophobia, anti-Semitism, divine retribution and martyrdom.  He speaks almost entirely in Biblical quotes and I think we are supposed to be surprised that these quotes come from the Christian Bible not the Koran.  Benjamin is disgusted that, unlike other religions, Christianity doesn’t produce martyrs anymore.  He’s apparently unaware that Germany is probably the only European country that has produced Christian martyrs in the last 100 years.

Nobody around him seems either to understand what is going on with Benjamin or, indeed to have any idea about the Bible.  The other teenage characters; the most “realistic” in the play, are, firstly, a former girlfriend Lydia, who is convinced that he has lost interest in her because he’s turned to violent porn.  (She’s probably more aware of what’s in the Bible than any of the adults!).  There’s also the disabled George who is constantly being bullied and referred to as a “cripple”  who develops a crush on Benjamin who believes he can miraculously cure George’s damaged leg.  As teenagers these characters are just about credible.

The adults are a different story.  There’s Benjamin’s mother, who is divorced and works nights and so is scarcely around,  She notices his strange changes of behaviour but is completely at a loss how to deal with it.  Then there’s the (deliberately) absurd quartet of teachers.  It’s probably worth noting that teaching as a profession is rather more highly regarded in Germany than most places so making these people absurd, spineless and pathetic pretty much has to be deliberate.  The most interesting is the biology teacher Erica.  Although she’s fully intellectually committed to a scientific view of the Universe she tries to deal with Benjamin by finding helpful bits in the Bible.  Apparently she is blissfully unaware of 1500 years of Biblical exegesis and needs to start from scratch.  Anyway, she gets more and more obsessed and it’s in many ways her obsession that drives the plot forward.  Her husband/boyfriend Marcus acts as an even more clueless foil. 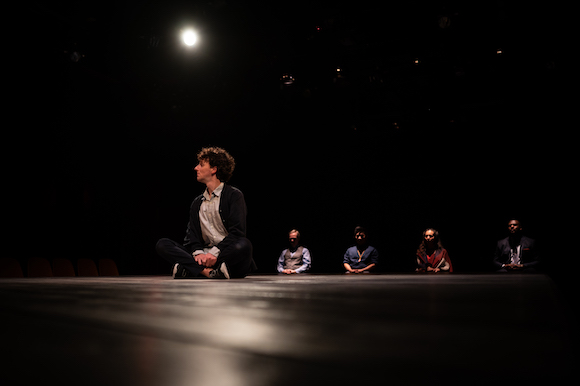 Then there’s the headmaster (that’s the word used) Willy Belford.  He’s a spineless bureaucrat with underlying authoritarian tendencies.  Rather than, for example, deal with Benjamin jumping fully clothed into the swimming pool to protest co-ed swimming lessons he mandates “modest swimwear” for the girls.  Rather than confront Benjamin’s disruption of a lesson on evolution he demands that Erica teach Creationism as well.  He’s also a really creepy sexual predator.  He also seems completely unaware of what is taught in the school he is nominally in charge of.  Like his colleagues he is completely unable to deal on any level with the “paradox of intolerance”.

There is a religious “authority figure”; Vicar Dexter Menrath, who apparently teaches (or largely doesn’t teach) Religious Studies.  Apparently he’s both a vicar and a Pentecostalist which seems a bit odd.  He tries to recruit Benjamin as a youth leader but makes no attempt to counter Benjamin’s absurd pseudo-theological arguments.  One wonders if he ever attended a theology class.

So that’s the German core.  It’s clearly rooted in a pre-Trump European world where “fundamentalism” = “islam” and the idea of Christian fundamentalism of the same ilk is absurd and even a bit funny.  Adults drawn from the country’s most respected professions are ridiculed.  And it’s all done in a fairly artificial Brechtian framework. 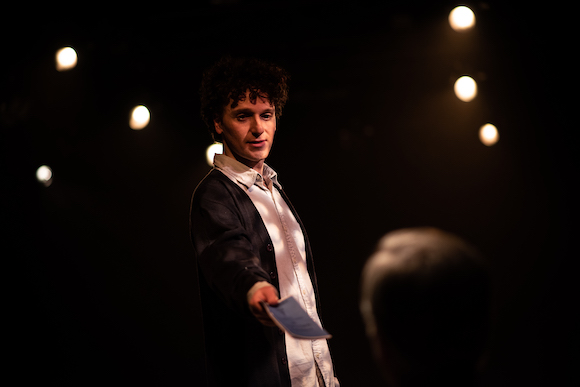 Moving it to somewhere in the Anglosphere (where exactly?) adds a whole layer of other questions while softening some of the sharp edges.  A Toronto audience in 2023 likely has a quite different perspective on Christian fundamentalism than a German audience a decade earlier.  If nothing else, the idea seems less implausible and more dangerous.  On the other hand schools with teachers going through the motions and spineless Principals probably feel less absurd than in Germany.  Antisemitism doesn’t have quite the same impact either and a tradition of some Christians resisting that persecution even to death is not part of modern Canadian history.

The nine long paragraphs above were provoked by just ninety minutes of fast moving, thought provoking and often very funny stage action, which is a pretty considerable achievement.  The staging is very simple with the actors sitting in chairs on the short sides of a central raised stage with the audience ranked on the long sides.  Characters, chairs and the odd prop move on and off stage efficiently.  There’s a lot of, mostly uncomfortable humour.  Erica White holds a biology class where Benjamin strips to his underwear while the others put condoms on carrots.  Benjamin wears a monkey suit to protest the teaching of Darwinism.  Lydia tries to get Benjamin to touch her breasts in an incredibly awkward scene.  There’s also a fair bit of violence, some of it quite serious.  All in all it’s hard to take one’s eyes off what’s going on while thinky thoughts just build up relentlessly.  I guess that’s what good theatre does.

The performances are really good.  It’s hard to fully inhabit characters who are, at least in part, caricatures but this cast manages it.  Nabil Traboulsi plays Benjamin.  He seems to be specialising in unhinged characters (c.f. Gloria).  He does it by being quite understated which seems just to amplify the crazy.  Aviva Armour-Ostroff also impresses as Erica.  There’s a “descent into madness” arc here as her perfectly reasonable actions become less reasonable in the face of lunatic official responses to her actions and her increasing obsession.  Which brings us to Ryan Allen as the headmaster.  He is brilliant.  It’s such an unsympathetic role; gormless, creepy, a moral cypher, and he completely pulls it off.  Adriano Reis as George is also very good.  There’s something deeply sympathetic about his almost apologetic portrayal of the bullied and ignored kid.  Richard Lee as Marcus Dixon, Deborah Drakeford as the mother, Ryan Hollyman as the clergyman and Charlotte Dennis as Lydia all have their moments and make essential contributions.

Martyr, as performed by ARC, is a bit of a hybrid.  It’s likely to leave one a bit puzzled at what’s really going on where the German and Anglo worlds that it straddles don’t quite mesh.  It’s also quite deliberately absurd and non-realistic in a way that may be more familiar to European than Canadian audiences.  But the performances are strong and the questions posed, but rarely answered, are important.  I’m glad that theatre like this is being presented here and would certainly recommend this show.

Martyr runs at the Aki Studio at the Daniels Spectrum until January 29th.