Jean-Joseph Cassanéa de Mondonville’s Titon et l’Aurore is another member of that rather long list of operas that were well received in their day and then totally disappeared from the rep.  It’s interesting as an example of what was happening on the French opera stage between the retirement of Rameau and the revolution (it premiered in 1753) and because it played an important role in the “querelle des bouffons”.

It’s billed as a “pastorale héroique” and there are three acts plus a prologue.  The prologue concerns Prometheus using fire to bring life to humans because the gods are too idle to do so.  This seems intended as a sort of justification for the French monarchy and has nothing to do with the main story.  Titon, a shepherd, is in love with the goddess l’Aurore but so is Éole, god of the winds, while Palès, goddess of shepherds is in love with Titon.  Despite the plots of the gods Titon remains faithful to l’Aurore so Palès punishes him with old age.  Amour isn’t having this and rewards his constancy by making him young and immortal.

The work was revived in 2021 at the Opéra comique in a production by Basil Twist and William Christie.  I’m pretty sure it’s been cut quite heavily as several characters who appear in the standard summaries are missing and it comes in at almost exactly two hours, which is very short indeed for an 18th century opera.  Twist is a noted puppeteer and the production makes extensive use of puppets; initially as the clay figures which Prometheus brings to life, then as flames, as winds and, above all, as sheep.  There are prancing sheep, nuzzling sheep, flying sheep, stacked sheep and sheep dancing a gavotte.  There are enough sheep to satisfy a home sick New Zealander.  Much of this is because, even with cuts, there’s a lot of dance music to provide action for and, a few nymphs aside, all the dancers are ovine. 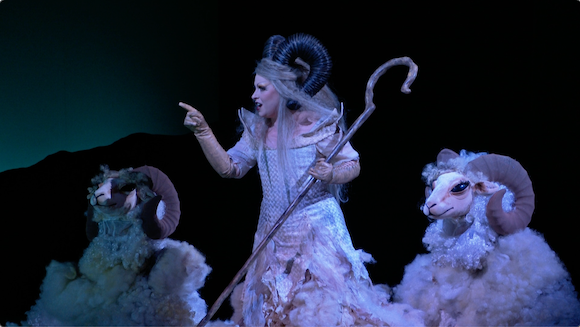 Sheep aside, the look is kind of high tech baroque.  Sets and costumes are pretty conventional for an 18th century allegorical work but rather effective video projections supplement them.  Acting veers between naturalistic and stylised.  With some pretty spectacular puppetry, it’s interesting to look at.  But really, there’s nothing very profound about it.  It’s a court entertainment.

The music is about what one might expect.  It’s a little less in your face than Rameau perhaps with some Italianate influences but it’s basically well crafted 18th century court music with lots of dance tunes in the usual formats.  The cast is a good one with plenty of specialists who have worked with Christie before so there’s lots of stylish singing.  Gwendoline Blondeel sings l’Aurore sweetly opposite Reinoud van Mechelen in the haut-contre role of Titon.  Emmanuelle de Negri as Palès and Marc Mauillon as Eole are suitably dignified, in a Slartibartfast sort of way, as angry goods.  There’s some serious baroque acting and baritoning from Renato Dolcini as Prometheus.  Julie Roset is rather cute as Amour.  The band, of course, is Les Arts Florissants, and they produce a sound which is refined but not too refined.  I think there are musettes in their somewhere and, if not, someone can honk effectively on the haut-bois.  Christie’s musical direction is as assured as one would expect.

The recording was made in 2021 without an audience.  It’s filmed extremely effectively by François Roussillon backed up by very good picture quality even by Blu-ray standards.  The sound is also excellent whether one chooses the DTS-HD-MA option or the high definition stereo.  There are no extras but the essay in the booklet does a good job of contextualising the piece though I’d also suggest reading the Wikipedia entry if you are seriously interested in the background.  The booklet also includes a synopsis and detailed track listing.  Subtitle options are French, English, German, Korean and Japanese.

I don’t think this is so musically memorable that I will find myself watching it over and over but it is an interesting piece from a period underrepresented in the catalogue.  And there are sheep.  Lots of sheep. 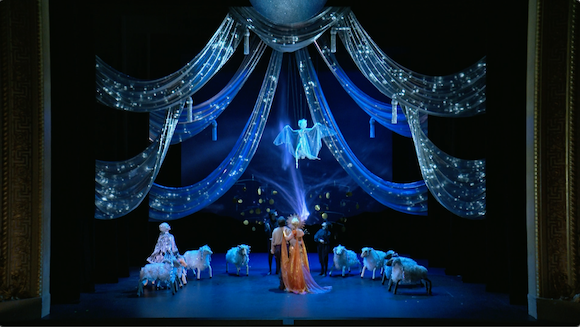