The libretto of Massenet’s Cendrillon is much more ambiguous than Rossini’s straightforward La Cenerentola and given that we all “know” the Cinderella story exploiting those ambiguities is likely to prove attractive to a director.  Fiona Shaw, whose Glyndebourne production was revived in 2019 under the revival direction of Fiona Dunn, finds rather more than. most.

The core ambiguity of “dream vs reality” (for some value of reality) is certainly there.  Characters are sometimes doubled so that they can observe themselves.  Heavy use of mirrors reinforces this as well as adding interesting visual elements.  There’s an additional silent character of “little Lucette” who pops up from time to time and both Lucette and the Prince appear in places and ways that they are not supposed to.  Lucette appears in Act 2 as part of the Prince’s doctor’s entourage and the Prince (or Kate Lindsey if you will) also appears as an additional female servant in the de la Haltière household.  In fact he’s still dressed that way in the final scene where s/he is united, at last, with Lucette.  If composers introduce gender ambiguity into young male roles why should directors not play with it? 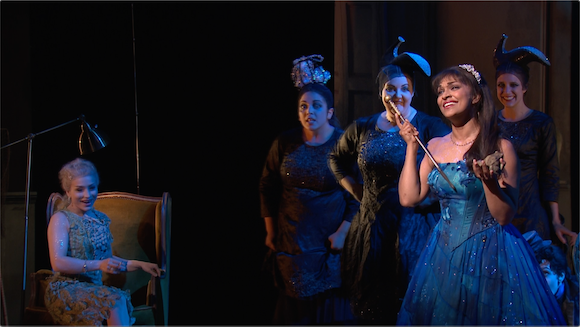 Other elements of the production are quite interesting.  Madame and her daughters are depicted, despite her ancient ancestry, as people with lots of money but little taste which is quite funny given we are in that temple of aristocratic good taste, the Maison Christie!  Shaw has quite a lot of fun with this, well supported by a splendid performance by Agnes Zwierko as Madame.  The tricky problem of what to do with the interminable ballets is met by creating complex patterns of movement (that mostly aren’t “dance”, let alone “ballet”) made more complex by the moving mirrors.  Add to this that it’s mostly rather dark and one has to be on one’s toes to figure out what actually is going on.  The overall impression provided by the “look” and the ambiguity is quite dark.  This isn’t a Disney fairy tale but something much more of the rather murky world of the original Perreault story.  Perhaps more nightmare than dream.

The performances are good.  Lucette is, unsurprisingly, sung by the chatelaine of Glyndebourne herself, Danielle de Niese. It’s another of those role where her exotic good looks and movement skills help a lot.  The part sits nicely for her voice too and she’s just fine in that department.  Kate Lindsey is vocally secure as the Prince and acts nicely.  Nina Minasyan has the notes and the timbre appropriate to La Fée and produces an appropriately shimmering sound.  As previously noted Agnes Zwierko really throws herself into her role as Madame and she’s well supported by Julie Pasturaud and Eduarda Melo as a rather dorky pair of sisters.  The rest of the cast are fine as are the Glyndebourne Chorus.  The London Philharmonic produce quite a sumptuous sound  and John Wilson holds it all together nicely despite the rather frenetic stage action. 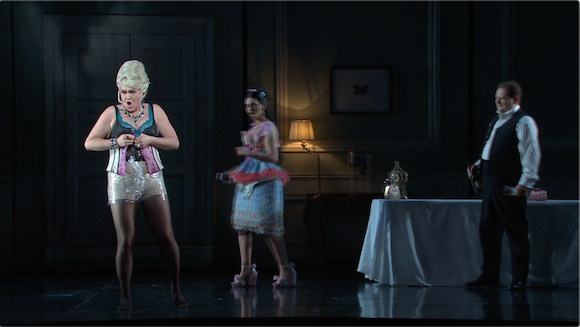 This is a really difficult production to film.  It’s dark most of the time and there are mirrors.  François Roussillon does a decent job but it’s still often difficult to get a clear idea of what’s happening even on Blu-ray.  I’m pretty sure that the experience in the house was different and that this is just one of those productions that doesn’t translate well to video.  The sound though (stereo and DTS-HD-MA) is fine.  The only extra on the disk is a. cast gallery but there’s a decent interview with Fiona Shaw in the booklet along with a synopsis (but no track listing).  Subtitles are English, French, German, Korean and Japanese. 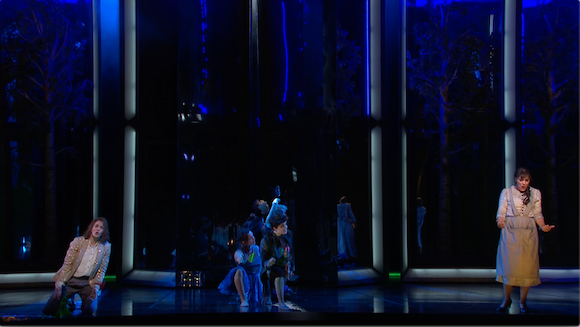 So, this is a pretty dark but well sung take on Cendrillon.  It’s probably a notch more sophisticated than the Freiburg recording that also plays with the dream idea.  The only real issue is the video.  I think I now understand why the Met has never filmed its mirror heavy Die Frau ohne Schatten.

1 thought on “Cendrillon – dream or nightmare?”