Traviata – Vous méritez un avenir meilleur is a theatre piece that combines elements of Verdi’s La Traviata with elements of the source material for it; Dumas fils’ La Dame aux camélias (both the novel and the play).  There is also some newly written and composed material.  The creators; Benjamin Lazar (director), Florent Hubert (arrangements and musical direction) and Judith Chemla (who sings Violetta) aimed to create a work that goes further than the source material in exploring the inner psychology of the main character.

It was written for La théâtre des bouffes du nord which only seats 500 and allows for a much more intimate show than a typical La Traviata.  The decision was made too to integrate the instrumentalists into the stage action so there’s no pit band and no conductor.  The eight players interact with the singers in quite complex ways.  The horn player; Benjamin Locher, also sings le baron Douphol.

The overall result is a performance that’s edgier than almost any other La Traviata I’ve seen (really only Dessay’s performance in Aix comes close) plus really having an intimacy and a sense of ensemble that grand opera can’t really match.  I think it succeeds on many levels.

The plot line follows the opera fairly closely with some interesting and sometimes amusing interpolations.  In some ways this created by shifting between Violetta Valéry and Marguerite Gautier as the main character.  So she can discourse on the attractions of Dumas (the young one not the fat one) and we have scenes of the opening of Gautier’s coffin and the auction of her effects post-mortem.  The doctor also becomes quite a different character.  He functions in large part as the purveyor of the copious quantities of drugs consumed at Flora’s parties.  Much of Act 2 Scene 2 is taken up with drug preparation overlaid with a monologue about hearing music in the arteries of a dying tuberculosis patient which causes Flora, who has over indulged, too hallucinate that a guest knocking on her door is Death come for her.  It’s funnier than it sounds. 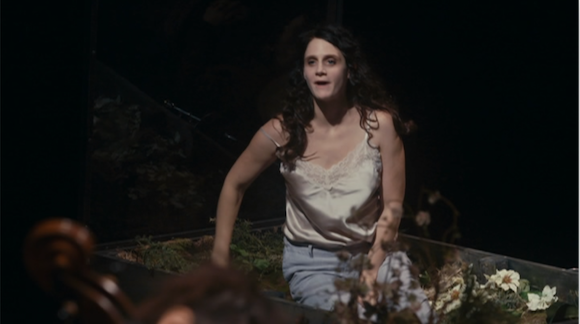 The performances are interesting.  All the principal characters sing well enough to carry off that part though they are not professional opera singers.  At least Chelma isn’t (see comments).  Damien Bigourdan (who is an opera singer!) as Alfredo is notably good.  But they have the freedom with small house and small band to be much more intimate and they use it to effect.  The same with the instrumentalists who are much freer to interpret and bend the music than a pit orchestra ever could be.  Jérome Billy is a rather sympathetic Giorgio Germont who also double up on piano. Chemla is a superb actress.  Her stamp is on the performance from beginning to end.  She sings the big numbers well enough but  it’s her handling of the dialogue that really impresses.  I should probably mention that most of the singing is in Italian and the dialogue in French but that’s far from universally the case.  The mixture actually works rather well. 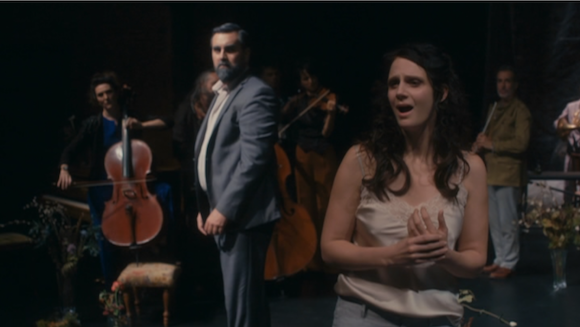 Among the supporting cast both Florent Baffi as the doctor and the splendidly loopy Flora of Elise Chauvin (who doubles as Anina) deserve a mention.  There is something quite sinister about Baffi and Chauvin as stoned Flora is quite something.

Corentin Leconte directed for video and this is very much a film in it’s own right rather than a documentary record of the stage show.  It’s mostly shot with handhelds and to create some consistency the fixed cameras were mounted unstably.  It works.  There’s an immediacy  to the film and one isn’t aware of transitions between handheld and fixed cameras.  I saw this on DVD (there is a Blu-ray but I’m not sure what the added value would be given the sound and the camera work) and the sound options are Dolby 2.0 and 5.1 which is not exactly state of the art for 2018 but it works well enough for this show.  There’s some suggestion that the sound has been juiced up a bit relative to how it sounded in the house (see comments). Certainly the eight piece ensemble sounds quite “orchestral” at times.  Subtitle options are English and French.  The booklet has a wealth of information in French and English though the latter is in cruelly small print.

So, I thought this was a cool piece of experimental theatre that succeeded in what it set out to do.  It’s probably not for those who prefer frou frou versions of La Traviata but the adventurous will find much to like. 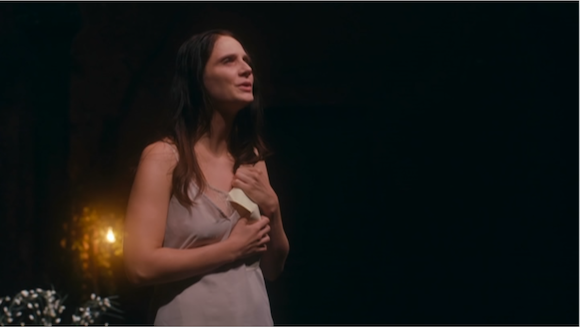 Leave a Reply to Definitely the Opera Cancel reply