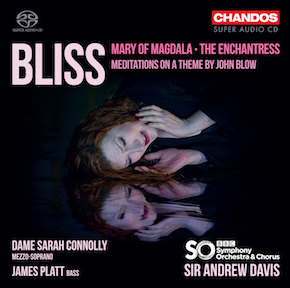 The latest release on the Chandos label from Sir Andrew Davis consists of three works by Sir Arthur Bliss; The Enchantress, Meditations on a Theme by John Blow and Mary of Magdala.

The Enchantress was written for Kathleen Ferrier and premiered in 1951.  The text is a free adaptation of the Second Idyll of Theocritus by playwright Henry Reed.  The preface to the score tells us that:

Sĭmætha, a proud Cyracusan lady, has been deserted by her lover Delphis. In despair she resorts to Sorcery to charm him back. She orders her slave girl to bring her the materials for her rites, laurel leaves, a bowl of flame, a potion. She prays to the Moon, bright Goddess of heaven, and to Hecate, dark goddess of Hell. She prays for the power of Circe and Medea. She casts on the flames barley grains to burn as the bones of her lover, and laurel leaves to burn as his flesh. She melts in the fire a waxen image of him. Her prayers are answered. Dogs baying betray the presence of Hecate and Sĭmæ—tha’s lover is drawn irresistibly back to her arms.

Bliss sets this in a characteristically mid 20th century British style.  It’s essentially tonal and very melodic in places but it can also reach into darker, more driven, more abrasive moods when the text demands.  Dame Sarah Connolly sings with sensitivity and drama and the accompaniment from the BBC Symphony is fine.

Meditations on a Theme by John Blow, premiered in 1955, is an orchestral suite in which each movement is labelled by a quotation from the 23rd Psalm.  There’s no musical relationship though to any of the settings of that text that I have heard.  It’s varied in mood though again very much of it’s time and place.  It gets a fine performance here.

Mary of Magdala is a dramatic cantata for contralto, bass, chorus and orchestra.  Here the BBC Symphony is joined by the BBC Symphony Chorus with Connolly once again (as Mary) and Paul Platt as Christ.  The text is by Christopher Hassall who died shortly before its premiere in 1963.  It tells the story of Mary, lingering by Christ’s tomb, becoming the first person to meet the Risen Christ.  The score is perhaps even more filmic than the first two pieces with a rapid succession of rich musical ideas.  It’s beautiful and touching.  The performances are exemplary.

The record is as well engineered as one would expect from this label.  It’s a hybrid SACD release though I was only able to listen to a downloaded version of the standard CD track.  That was clear and well balanced.  I’m curious about what the surround mix sounds like.  Documentation is unusually good on this release with very useful information about all three pieces.

So, another winner from Sir Andrew Davis.  Three works by a rather neglected composer that deserve to be heard more widely, expertly performed and well recorded.