Beatrice Cenci is an opera by Berthold Goldschmidt; a composer who moved from Germany to London in the 1930s for the usual reason.  Beatrice Cenci was written in 1950 but the orchestral style sounds rather earlier.  Comparisons with Mahler have been made though I don’t really see that.  Richard Strauss or Korngold perhaps?  In any event the work didn’t get performed at all until the 1980s and had to wait until the 2018 Bregenz Festival for its first fully staged production directed by Johannes Erat.  Curiously, though originally composed with an English libretto it was given in German in Bregenz.

It’s a three act work but quite short running about an hour and forty minutes. It tells the story of the Cenci family in Renaissance Rome.  Count Francesco Cenci is a psychopath who has two of his sons bumped off while seriously maltreating his wife and daughter.  he seems to be perpetually on the edge of being brought to account but never quite is.  So, his daughter Beatrice and wife Lucrezia, with the aid of the cleric Orsino, have him bumped off.  It’s all a bit clumsy and they are pretty rapidly brought to trial, convicted and executed.  The real dramatic interest lies in the psychological state of Beatrice who seems to be affected by whatever it is that the Count does to her at the end of Act 1, after which she seems both utterly indifferent to whether she lives or dies and a bit mad. 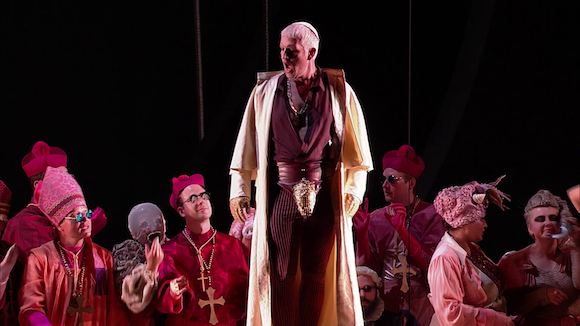 Perhaps it’s because the plot is so thin that Erath and his designers Katrin Connan (sets), Katharina Tash (costumes) and Bernd Purkrabek (lighting) choose to use a highly stylized, almost comic book Renaissance look for the piece.  It’s pretty effective, especially in things like the trial scene where people are sort of staring out of giant circles or pipes.  It’s also very dark.  Even on Blu-ray I had to draw all the blinds to see anything much on the screen.

The orchestral writing is much more interesting than the writing for voice so it’s a good thing that’s well served on the recording.  The Wiener Symphoniker with Johannes Debus conducting produce great clarity.  I think this is crucial for this piece.  The singing is pretty decent but there just aren’t a lot of really exciting vocal bits.  Gal James as Beatrice is very good and sings quite beautifully in the rather meditative music she gets in act 3.  Christoph Pohl does a great job of being utterly mad and evil without being over the top.  Dshamilja Kaiser is also convincing as Lucrezia.  Then there’s Per Bach Nissen as the pope’s agent Cardinal Camillo.  There’s something very weird about his acting and use of the voice but it fits very well with the overall aesthetic. 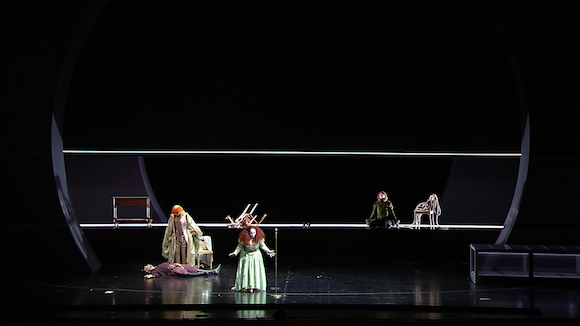 Felix Breisach directs the video.  He does a really good job of capturing a very difficult to film show.  The Blu-ray sound and audio (DTS-HD-MA and stereo) quality is what we’ve come to expect.  There are no extras and the booklet gives a cursory history of the piece, a synopsis and a track listing.  Subtitles are German, English, Korean and Japanese. I don’t think Beatrice Cenci is a lost masterpiece or anything but it’s quite interesting and another one in the “rescued at Bregenz” category.  This performace and recording do it justice.