Last night Pomegranate; music by Kye Marshall, words by Amanda Hale, opened at Buddies in Bad Times.  Inspired by the Villa of Mysteries in Pompeii, it tells the story of two lesbian lovers.  Cass has broken up with Suzy in 1980s Toronto.  She visits Pompeii as a tourist and is carried back in time to meet her lover in a previous incarnation in the Temple of Isis.  There’s a whole act dealing with the Mysteries, Cassia and Suli’s burgeoning relationship and the attempt by the Roman state to suppress the religion.  Then Vesuvius erupts.  Fast forward to Act 2 in a lesbian bar in Toronto.  Suzy, an immigrant from some unspecified war zone is pressured by her family to break up with Cass.  There’s a slightly surreal byt dramatically satisfying epilogue where modern Cass reunites with Roman Sulli in the ruins of Pompeii. 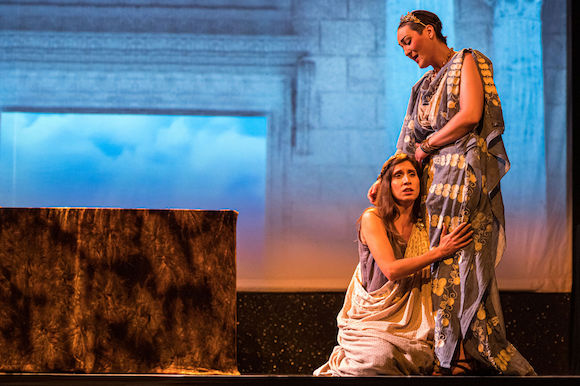 Does it work dramatically?  Pretty much.  The second act seems stronger than the first and some of the things that seem forced or anachronistic in the first act make more sense in the context of the second.  It’s not the first opera that has some implausible plot elements and I doubt it will be the last and I’m not sure it matters much.  Generally it woorks best when it focusses on human relationships; the lovers, Suzy and her family, the fears of the runaway slave in Act 1.  I found it rather less convincing in portraying larger issues in the Roman world but it’s no more unrealistic on that score than Donizetti’s portrayals of Tudor England.  So, basically it carries itself pretty well for almost two hours.

Michael Mori’s direction makes good use of the space.  The auditorium is used as well as the stage and the frequent changes of scene are handled well.  Minimal props are supplemented by projections by Laura Warren which help move things along and are rather beautiful in their own right.  The sequence depicting the eruption is particularly fine.

Musically it’s also very much a piece of two acts.  Marshall tries to create a kind of “modal” music for Pompeii.  It leads to some interesting instrumental writing (scored for three cellos, harp, flute and oboe).  She’s not afraid to depart from the basically tonal nature of the music on occasions either.  The vocal writing though is rather dull.  It’s very conversational which does, at least, allow the words to be heard (no surtitles) but I felt it could have used a couple of big numbers to punctuate the relentless dialogue.  We got that in Act 2 when the idiom changes to something quite jazz inflected (which I suspect is a more comfortable place for Marshall) with flute swapped out for alto sax and electronic keyboards added.  In this act Teiya Kasahara, as a bar tender, gets a big jazzy aria which he sings with considerable style.  The lovers get rather a good duet too.  As with the drama, the music is definitely more confident and impressive in the second act.

It’s well cast.  Vocally Teiya Kasahara is the star.  She’s strong as the Priestess in Act 1 singing in classical style with considerable power and authority.  She’s better still in Act 2 when she sings with more freedom to considerable effect.  She’s also dramatically convincing, especially as the cynical dyke bartender in the second act.  Rebecca Grey and Camille Rogers are very touching as Cass/Cassia and Suzy/Suli.  Rebecca has a lot of singing to do and much of it is quite high.  It feels a little vocally vulnerable but maybe that;s a good thing.  Camille has to pull off the difficult “tug of war” over Suzy scene between Cass and her family and manages it well.  There’s some fine physical acting too, including a pretty daring love scene. 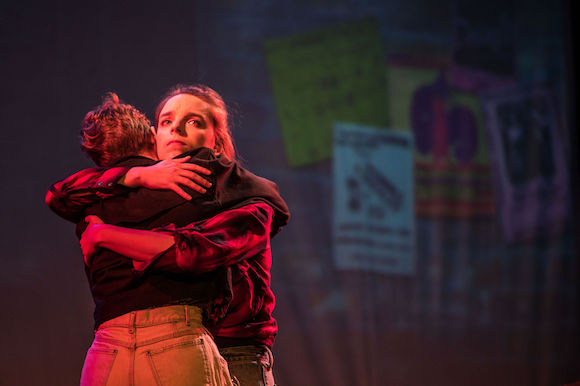 Aaron Durand is the “token man”.  In Act 1 he’s a rather bumptious Roman centurion.  I don’t find the character convincing but he sings and acts solidly.  In Act 2 he’s Suzy’s uncle full of himself and “family pride” (largely an extension of himself as master of his womenfolk) and there’s quite a bit of edge to the performance.  Stephanie Tritchew doubles as a runaway slave in Act 1 and Suzy’s mother in Act 2.  Both are examples of downtrodden women which seem to be something of a Tritchew specialty.  She’s vocally solid, though not with anything much to show off with and quite touching, especially in the first act.  Jennifer Tung and the band are off to one side of the stage which leads to occasional balance issues but they play well and everything hangs together.

It’s an interesting and enjoyable show.  Occasionally disbelief has to be suspended but, hey, it’s opera.  The world needs a lesbian opera.  Now it’s got one and it’s one well worth seeing.  There are four more shows; tonight, Saturday and Sunday at 7.30pm and Saturday at 2pm.