Toronto City Opera opened a run of three performances of Verdi’s La Traviata at the Al Green Theatre last night.  It’s a bit of a mixed bag.  Certainly less even than their Le nozze di Figaro earlier in the season.  Director Alaina Viau sets the piece in contemporary Toronto which creates both possibilities and problems.  I’ll come back to that because I want to talk about the performances first.

The star of this show, and the main reason for seeing it, is Beth Hagerman as Violetta.  It’s been said that the Violettas of the three acts are almost different characters needing different types of singer.  Hagerman nails all three.  She’s brilliant as Act 1’s good time girl; tossing off the big numbers with aplomb and managing to carry a costume I won’t begin to describe.  She’s equally fine in the other two acts and is genuinely touching both in her renunciation of Alfredo and in the final scene. 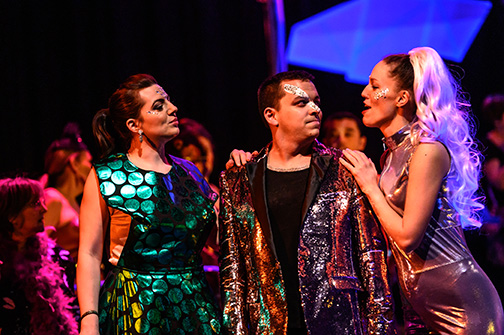 I wish the guys were as consistently excellent.  The Alfredo, Kijong Wi, gave hints that he could sing the heck out of Alfredo.  He has great top notes.  But he didn’t.  Especially in the first half of the show he didn’t seem to be supporting his lower register giving a curious sense of two different singers singing the two registers.  Was he saving himself because there are three shows in four days?  He can act though, and that’s the problem with Hendaya Rusli’s Giorgio Germont.  His singing is fine, if a little undemonstrative, but his acting is limited to maybe three stock gestures.  It’s curiously like watching Claymation.

The rest of the cast is pretty decent.  Lillian Brooks doesn’t have a whole lot of singing as Flora but she moves superbly.  Austin Larusson makes the most of the Doctor, doubling as the Marchese, and all the minor roles are perfectly adequate.  The chorus (amateurs remember) is really quite good.  It’s hard to make a coherent picture with forty people on a smallish stage but the party scenes are well sung and acted with gusto.  Wisely, I think, the Act 3 chorus scene is cut.  The chorus has so much more to do than in Nozze and between the chorus itself and the director they pull it off.  Jennifer Tung conducts with Ivan Jovanovic on piano.  Everything stayed together and I’m struck by how good this piece sounds in piano score.

So to the production and I’ll start with the caveat that in a production like this the production team do not have a couple of years to think through their concept and get all the details ironed out so any reservations I have should be taken with that in mind.  So Viau has chosen to set the piece in contemporary Toronto and switch up cancer for TB.  The libretto (not just the surtitles) is updated to reflect this.  Fair enough I think.  It moves the piece away from the Zeffirelli “frocks and furniture” aesthetic that, to me, is the bane of Traviata productions.

But it comes at a price.  La Traviata is Verdi at his most political.  At the work’s heart is a critique of bourgeois patriarchy.  A “fallen woman”‘s life must be sacrificed so that an arranged marriage can go ahead.  The brutality, and hypocrisy, of that is what Verdi is exposing and it’s what the “frocks and furniture” productions gloss over to avoid offence.  Could that scenario work in contemporary Toronto?  Maybe.  Perhaps the Germonts could be Korean oligarchs or something?  That doesn’t happen here.  The Germonts remain bourgeois from Provence and it takes a bit of a leap of faith to see a contemporary young woman in Toronto agree to give up everything to save her lover’s “family honour”.  So, ironically, the production does sort of fall into the Zeffirelli trap through trying to avoid it.

OK, I’ve got that out of my system so let’s talk about what does work.  It’s a spectacle.  In a good way.  Somehow Viau and her set and costume designers Holly Meyer-Dymny and Maureen Russell manage to cram a huge cast onto a large stage in a coherent and visually stunning way.  Check out the photos.  What the whole thing does is evoke the kind of party I don’t get invited to anymore.

There are other touches too.  SlowPitchSound is DJing the Act 2 party.  There are mobile phones all over the place which, for once, makes the occasional one going off in the audience not to distracting.  So mostly the updating works.  A bit more time to sort out the residual issues and it might have been even more convincing.

All in all, it’s well worth seeing and there are two more chances; tonight at 7.30pm and Sunday at 2pm.

1 thought on “La Traviata at TCO”