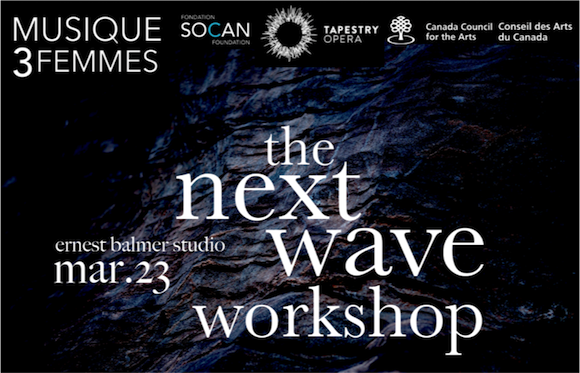 The operas are all winners of the inaugural $25,000 Mécénat Musica Prix 3 Femmes; a new prize supporting creation of operas by emerging female and female-identifying composers and librettists in Canada.  Tickets for the 23rd are available at https://musique3femmes.bpt.me

L’hiver attend beaucoup de moi – Composer: Laurence Jobidon, Librettist: Pascale St-Onge.  Amidst the harsh and cold weather of northern Quebec, Léa tries to reach a safe-house in order to protect herself and her unborn child. She meets Madeleine, a tormented woman who promises to lead her to the end of a road where no one else goes. L’hiver attend beaucoup de moipays tribute to feminine solidarity and resilience, as well as to the strength of the Quebecois territory. The work is led by director and former San Francisco Opera Adler fellow Aria Umezawa and will see its premiere at Opéra de Montréal in March 2020.

Book of Faces – “Nothing on Earth has prepared me for life like the Internet…” Book of Faces is a comic opera exploring the world of social media and two millennials for whom the struggle is just too real. The second collaboration between Saskatoon composer Kendra Harder and librettist Michelle Telford, Book of Faces sees a world premiere at Next Wave Workshop led by director and Artistic Director of Opera 5 Jessica Derventzis, and later performances as part of Highlands Opera Studio’s 2019 season.

Suites d’une ville morte – A woman returns to a place where she fell in love. She finds a piano on a heap of rubble. An exploration of the anatomy of a piano, this work examines the interplay of loss and connection in a world where everything can change in an instant. Based on the play Ghost Town Suites by Naima Kristel Phillips, Suites d’une ville morte is the first collaboration by Phillips with Croatian-Canadian composer Margareta Jeric. The work is in development for Toronto’s FAWN Chamber Creative, and is led here by FAWN founder and stage director Amanda Smith.

The Chair – Composer: Maria Atallah, Librettist: Alice Abracen, “You didn’t even know her name. You don’t even know my name.” With an original libretto by Abracen on a short story by Atallah, The Chair explores grief, loss, and friendship through the eyes of a teenager. Melanie loses her best friend in a tragic accident and returns to school to face throng of well-wishers and a mysterious new classmate. For the Next Wave Workshop, the piece is led by COC Ensemble dramatic coach and founder of Toronto’s Muse 9 Productions, stage director Anna Theodosakis.