I met yesterday with Ryan McDonald and Camille Rogers to discuss their new project, OperaQ, and its upcoming show Dido and Belinda.  The driving idea is that opera needs a space for “queer people to tell queer stories to queer people”.  Now I’m sure many peopl’s initial reaction would be close to mine along the lines of “surely there’s no shortage of gay people in the opera world?”; which is ,of course, true but not really the point.  Gender presentation in opera is highly conventional, both on and off the stage.  There are strong stereotypes about “masculine” heroes.  Can an overtly gay man get cast as Otello (or even Hadrian)?  There are equally strong stereotypes about how female singers should present.  Everybody is supposed to be glamorous à la Maria Callas, an attitude that was brilliantly taken apart in Teiya Kasahara’s Queer of the Night.  Transgender issues add another layer onto this where, paradoxically perhaps, operas traditions of cross dressing confine rather than create space for transgender expression.  So, opera, lots of queers but not much queerness? 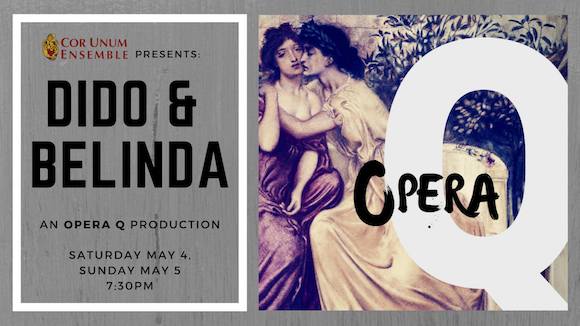 So, for Ryan and Camille the answer (or part of it) is to create an opera company that will address these issues from a queer and trans perspective and speak and market both to the queer community and the traditional opera audience; seeking also to transcend the (yet another) stereotype of opera going queers as being affluent, otherwise conservative, white males of a certain age.  The initial vehicle for this is a show, in partnership with Cor Unum, called Dido and Belinda though they have other projects that they are not yet ready to unveil.  The show is basically a fairly straightforward version of Purcell’s Dido and Aeneas (both Camille and Ryan are part of the Early Music program at UoT[1]) except for the casting.  Ryan, a countertenor, will sing Dido, and Camille, a mezzo, will sing Aeneas.  There will be a baritone sorceress and some other unconventional casting.  The hope is to challenge the audience to rethink the relationships between bodies and genders.  There’s also going to be some added dialogue for Belinda to try and conctextualize the story for an audience that may not be familiar with the piece or the backstory[2].  Finally it’s not going to be the usual 55 minutes of doom and gloom.  They will try and have fun with the first half; before the sorceress’ intervention and the rapid descent into tragedy.

As to logistics, Dido and Belinda will play May 4th and 5th in Trinity College Chapel.  Details are here.

[1] The apparently almost impenetrable separation of the early music and opera/symphony world (and maybe it’s actually three worlds with a distinct baroque component too) is weird and problematic but that’s a subject for another day.

[2] I have really conflicted views here.  I know that knowledge of the classics isn’t what it was when I went to school but I’m very leery of speaking down to audiences.  Hopefully OperaQ can find the right balance.