Today’s RBA lunchtime concert featured the three tenors; Kammersinger Michael Schade, currently appearing as Aegisth in the COC’s Elektra, Irish tenor Mick O’Schade and Scottish folksinger Michael McSchade.  They were most ably supported by COC Concertmaster Marie Bérard and Sandra Horst at the piano.  The concert was billed as a tribute to John McCormack and Fritz Kreisler but sad events had morphed it into also being a tribute to the CBC’s Neil Crory.  I hope, and believe, that he would have appreciated the combination of whimsy and serious music making.

There was some lovely Schubert, in which Michael showed his mastery of the art of the Lied; moving seamlessly from dramatic to conversational to entirely intimate.  There was beautiful playing from Marie in pieces from Korngold and Wagner.  There were four of the Strauss songs for high voice almost always sung by soprano but here, of course, by tenor.  If Neil was listening somewhere I hope the utterly passionate Zueignung and the beautiful Morgen with Marie doubling the melody line affected him as much as it did me. 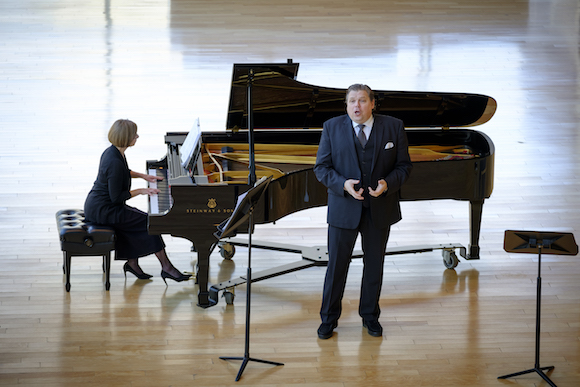 Then there was the final set of John McCormack numbers.  Suitably sentimental stuff with a rather good a capella Annie Laurie and finishing up with, you’ve guessed it, Danny Boy.

So good to have Michael back in Toronto and to hear more than his six minute cameo as Aegisth (impressive though that is).