I guess Verdi’s Nabucco is even more closely associated with the Risorgimento than his other works so it’s not perhaps surprising that, for his 2017 production for Verona, Arnaud Bernard made the connection explicit.  We are in Milan during the Five Days.  La Scala; which does duty as the Temple, the Hanging Gardens and itself, stands in the middle of the huge performance space of the Arena di Verona.  Italian and Austrian soldiers, including cavalry, ride around the arena or clamber over the terraces.  It’s wild and spectacular but it’s more than that.

The first two acts seem straightforward enough, bar the Austrian/Milanese duality replacing Babylonian/Hebrew.  It’s in acts 3 and 4 that it goes full out.  La Scala revolves so that we are in the interior.  The Austrians are in the parterre, the Milanese aristoctacy in the boxes and the mob in the gallery.  Nabucco is playing on the stage.  The crowd goes wild after Va’ pensiero and it’s encored.  As Nabucco reclaims his senses and his throne he brandishes a tricolore.  The “audience” hangs Italian flags from the balcony, the Austrians mill about in confusion and, as the final notes are played, leaflets descend in clouds from the gallery.  It’s a slo-mo version of the La Scala scene from Visconti’s Senso and one senses that the actual audience are reading every image and symbol because they are going nuts and I think, were I Italian, I would too. 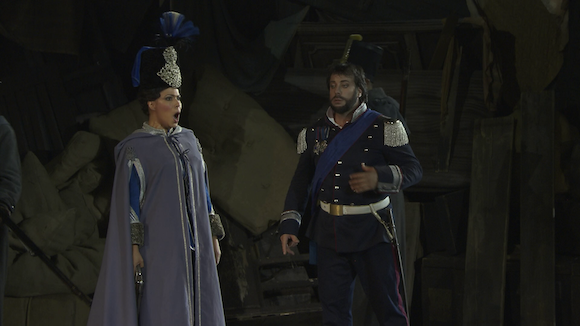 There’s a sense then in which the music takes second place to the stage action, which is hardly unusual in a stadium production and the acting tends to the big gesture… ditto  That said the singing and acting is pretty good.  George Gagnidze is a very effective Nabucco; singing strongly and with presence.  Susanna Branchini is fierce as Abigaille but find the appropriate pathos at the end and, throughout, Ninu Surguladze is a sympathetic Fenena.  Rafael Siwek looks and sounds just right for the prophet Zaccaria.

Daniel Oren’s conducting is interesting.  For a start he’s wearing a yarmulke which in itself says something about the Jewish/Italian ambiguity going on.  There are also times when he’s hardly conducting.  During the encore of Va’ pensiero it’s more like an ecstatic interpretative dance.  Still he gets a suitably red blooded sound out of the orchestra and keeps things together well.  No mean feat here.

It’s a huge arena and there’s a lot going on so Andy Sommer has a task on his hands with the cameras.  I think he does very well.  He’s helped by top notch video quality, though at times, even on Blu-ray and a big screen, it feels like detail is being lost.  This is probably the first opera video I’ve seen where I thought 4K would help.  The sound is also very good but notably richer on the DTS-HD-MA track than the stereo.  Subtitle options are English, French, German, Italian, Spanish, Korean and Japanese.  The only extras are trailers but the booklet has a decent director’s note as well as synopsis and track listing.

So, an intelligent concept executed with both care and aplomb and pretty decent performances.  It’s probably not the most nuanced Nabucco you will ever see but I found it fun to watch.