Yesterday the lemur and I ventured out to Roy Thomson Hall for Tafelmusik’s Singalong Messiah.  I did this with some trepidation.  There were reasons for this.  First, I’m not a great sight reader; I sorta, kinda get by but I’m much more comfortable in the middle of a group of better singers that I can key off.  But there’s the rub, I’m a tenor.  I did this gig before in 2003 and there were like a million sopranos and seven tenors.  See first point.  It ain’t happening.(*). Finally, I had been fighting a cold/cough all week and feared that my voice would be better suited to Aristophanes than Handel.  Fools tread boldly etc. 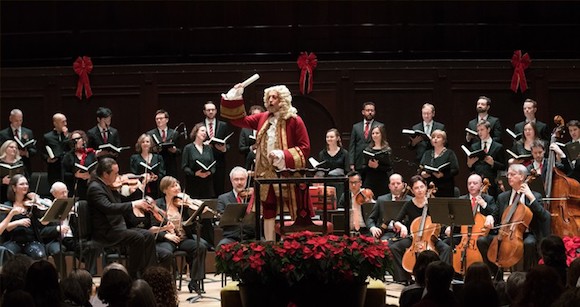 This thing has now been going 32 years; 31 at Massey and then, due to the Massey 2.0 project, transplanted to Podland.  It’s startling how many people had been doing the thing for 15, 20, even 30 years.  Of course none of those are tenors.  It’s not a straightforward presentation of the work.  It’s established it’s own set of traditions; mostly around Mr. Handel’s schtick.  I don’t actually remember the French telegram boy on a bicycle from last time but it must date back.  After all surely even God doesn’t send telegrams anymore.  She has a smart phone I bet.  How else would she play Kleptocats?  Anyway, it’s good fun and eventually we got to sing and hear the rather good quartet of soloists though the excellent Tafelmusik Choir was rather lost in the mix.

The solo recits and airs give a pretty good flavour of the differences between a Tafelmusik Messiah and one at the TSO; even one with as light a touch as this season.  It’s an even smaller orchestra and the soloists are more obviously selected for their baroque qualifications.  This was perhaps best exemplified by the tenor; Charles Daniels.  His approach to the music is slightly idiosyncratic with few opportunities to ornament and embellish eschewed.  There were some seriously high grace notes in there too.  Perhaps it sounds a bit mannered but it’s never dull.

Much the same could be said for soprano Sherezade Panthaki, whose ornamentation approached Daniels’ in its complexity while she sang with quite lovely tone and feeling. Krisztina Szabó and Drew Santini, who rounded out the quartet, also displayed first class musicianship and sense of style.  I love the hautbois and the valveless trumpet too and there were Italian bagpipes (really!).

And there was the chorus; all of us.  The rampaging hordes of sopranos, the manful basses chugging along at the bottom and the mixed bag of “contraltos, countertenors and depressed mezzo sopranos”  on the alto line.  And the tiny band of tenors making a last stand against the barbarian hordes in a pathetic clump in C2.  We survived.  We were perhaps a bit ovine at times though.  I certainly lost the plot more than once; perhaps worst of all in that fiendish final Amen where there is absolutely nothing textual to key off.  Just a whole bunch of people singing “Ah, Ah, Ah” in what they hope is the right pitch and tempo.  Still we made it to the end and the final mad encore of Hallelujah (complete with Keith’s green jacket).

Would I do it again?  Probably.  Maybe if I take up smoking I could become a baritone?

(*)I know tenors are rare but I’m not convinced they are a smaller proportion of the population than AB-s.  I suspect there’s a fifth column.  There are, I fear, tenors who sit with their wives in the soprano section doubling the soprano line an octave down.  Herr Händel’s suggestion of an “agricultural accident” is altogether too kind.