Anna Theodosakis couldn’t quite pull off all that within the confines of Mazzoleni Hall but the essence was well conveyed with some appealing singing and acting from Kateryna Khartova as Eléonore.  The mother was played in a convincingly, flapper like, angular style by Rachel Miller while Noah Grove was a rich toned and very creepy Satan.  Michael Dodge played the cyclist but his head didn’t explode, which I appreciated as that would likely have happened right next to me.  Peter Tiefenbach led a twelve piece, on stage, ensemble, which was a welcome change from piano only.  The performance of this ebullient score was appropriately red blooded.  The limited stage space left for the singers was compensated for by Theodosakis’ intelligent use of the auditorium. 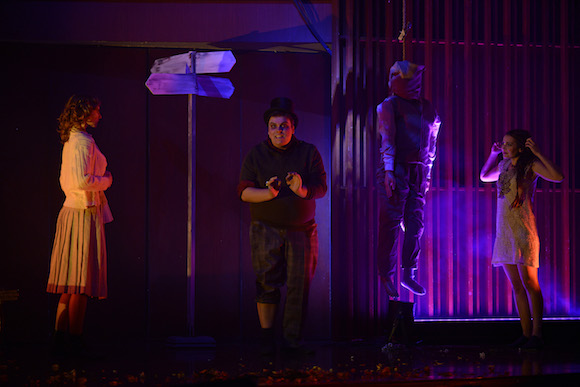 Rachel Miller, Noah Grove, and Kateryna Khartova in Tears of the Knife

Next came the brothers Conquer playing Schulhoff’s Hot-Sonate for piano and saxophone.  This jazz inspired piece is quite interesting if a bit long for my taste.  It was nicely played by the Conquers and provided “cover” for re-arranging the stage for Hindemith’s Hin und Zurück that followed. 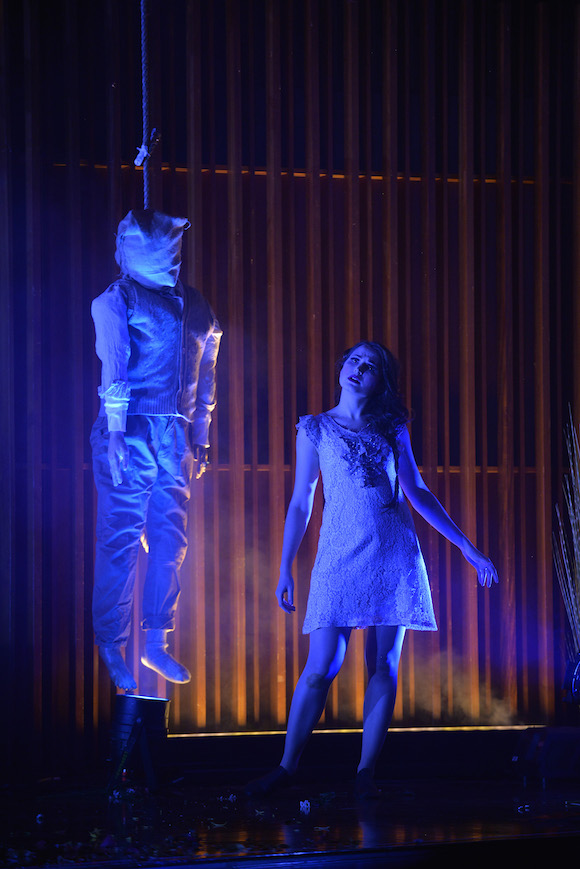 Kateryna Khartova in Tears of the Knife

Hin und Zurück is, famously, a musical palindrome.  A man comes home early to give his wife a birthday present, discovers she has a lover and shoots her.  The body is taken away.  The body is brought back, he unshoots her etc.  The lines; words and music, of the first half are repeated in reverse order in the second.

Michael Dodge and Giulianna Misasi in Back and Forth

The bulk of the singing here is done by Robert played by tenor Michael Dodge and Helene sung by soprano Giulianna Misasi.  Both made the most of the twelve minutes or so the piece takes with clear, accurate delivery and slightly stylized acting.  Among the surprisingly large number of cameos Rachel Miller again stood out as the Maid; angularity personified.

The show is well constructed and contains pieces rarely seen (though Opera 5 did Hin und Zurück not so long ago).  The whole show is only a little over an hour long and, unfortunately, last night was the last performance.