What’s Mozart’s Così fan tutte about?  I doubt there’s a good answer to that question but one element of what it’s about is artifice.  That appears to be Jan Philipp Gloger’s jumping off point for his Royal Opera House production filmed in 2016.  I have pages of notes on how the setting changes and who is singing to whom about what at which point in the opera.  It starts with the “cast”, in 18th century dress, taking a curtain call during the overture but it soon turns out to be a bit more complex.  Dorabella, Fiordiligi, Ferrando and Guglielmo appear in the auditorium in smart modern dress as late comers taking their seats.  Soon the boys are on stage in front of the curtain with Don Alphonso (for some reason dressed as a 17th century divine) while the girls hide in embarrassment behind their programmes.

When the curtain goes up we are with the girls in the ROH crush bar.  And so it goes on getting stagier through a 1940s railway station when the boys make their farewells, a Garden of Eden, complete with serpent, for the poison scene to an Act 2 which takes place in various parts of a theatre.  It’s not in any way a simple “theatre within a theatre” production.  Rather it challenges our ideas about representation, audience, time and space.  I’ve only scratched the surface of the images that Gloger conjures up.  The net effect is to challenge all our ideas about what part of the story is “real” (of course, none is but…).  It culminates, aptly enough, in a completely ambiguous conclusion. 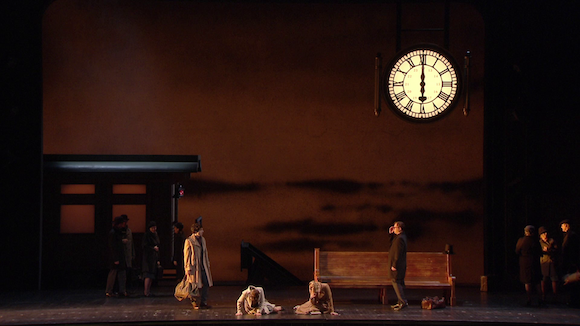 Performance wise it’s really good.  The ROH has assembled a cast of top notch young singers (and serious eye candy) for the lovers and thrown in two comic veterans to round things out.  The girls; Corinne Winters as Fiordiligi and Angela Brouwer as Dorabella, knock the big numbers out of the park and do a really good job of differentiating the characters.  I’m not sure I’ve seen a production where the distinction between “good time girl” Dorabella and more introspective Fiordiligi is done so well with without falling into caricature.  The guys are equally good.  Daniel Behle, as Ferrando, is absolutely idiomatic and suitably confused.  Alessio Arduini as Guglielmo sings beautifully and his  seduction scene with Brouwer is brilliant.  Johannes Martin Kränzle as Don Alfonso and Sabina Puértolas as Despina are comic genius; musically and physically.  At times it’s over the top but never too far.  The chorus is excellent and Semyon Bychkov gets a really classy sound from the orchestra.  The woodwinds sound particularly fine.

Rhodri Huw’s video direction is judicious and with a really high quality picture on Blu-ray he can afford to give appropriate setting shots of some of the darker scenes.  He also copes well with singers showing up in the auditorium.  The DTS HD-MA sound track is really detailed.  I don’t think I’ve ever been so struck by the bassoon in Ah guarda sorella.  I guess the conductor gets some of the credit but the recording helps a lot.  There’s a bout eight minutes of extras on the disk.  They are worth watching but won’t really prepare you for the production!  The booklet has an essay and a synopsis but no track listing.  Subtitles are English, French, German, Korean and Japanese.

This is an intriguing production with very high musical values.  I would expect it to appeal to all but the most traditionally minded.  I’d rate it up with Claus Guth’s Salzburg production as a good Così for the reasonably adventurous.