For the last few years the COC has had a fairly glitzy evening at which the next season is announced and there are interviews, a few performances etc.  This year, for whatever reason, the two elements were divorced.  The season was announced in a press release win January with no fanfare; not even a press conference.  The glitzy bit happened last night with a cocktail reception and a stage event hosted by Brent Bambury. 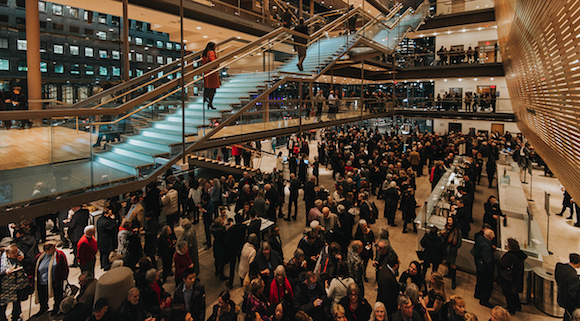 Obviously the suspense and drama of the season announcement was missing and what replaced it were a series of discussions around aspects of mounting an opera and running an opera house.  There was a tribute to the unseen backroom staff, there was Sandra Horst on the challenges of training a chorus, there was a panel discussion (Daniel McIvor, Peter Hinton and Cori Ellison) on the challenges of creating Hadrian and new opera in general.  The Blessed Rufus was with us only in spirit.  Johannes Debus and Corrado Rovaris talked about the challenges of conducting and Daniele Guevera showed us how the lighting works.  I enjoyed it all but I did hear grumbling about too much talk and not enough music.

And so to the music… an overture of course from Johannes and the orchestra (Otello?  I think so but I was just settling in and not really concentrating).  Sam Chan and Simone McIntosh with Il core vi donno from Così.  They are a lovely couple and they sounded great last night.  Then came perhaps the most intriguing music of the night; the entracte from Act 2 of Hadrian.  This is a much more operatically mature Wainwright than anything in Prima Donna.  It’s tuneful but the orchestration is sophisticated and there’s even some dissonance lurking in there.  If the whole opera is this good it should be a hit.

Tracy Cantin (covering Anna Bolena at present) chipped in with a very nice Ave Maria from Otello and the irrepressible Danika Lorèn finished things up with Musetta’s Waltz from La Bohème.  The whole on stage thing lasted a little over an hour and I guess maybe 20 minutes of that was music so I do get that some people would have preferred more music, less talk.  I’m obsessed enough with the technicalities of putting on opera not to mind.

As to the reception, the wine was good and refills readily available, especially if one avoided the crowds by heading upstairs.  The food required sharper elbows than I possess!