Die Fledermaus offers a lot scope for reinterpretation.  Like so many works involving spoken dialogue there is a tradition of reworking that dialogue to work in contemporary humour and geographic relevance to the point where there is no canonical version though there’s probably a set of general expectations.  Joel Ivany’s production for the Glenn Gould School, which opened last night at Koerner Hall, goes further than most to create a “play within a play” dynamic riffing to some extent on the difficulty of staging an opera in a concert hall.  He also makes the decision to use English dialogue but have the sung text in the original German (except for the finale). 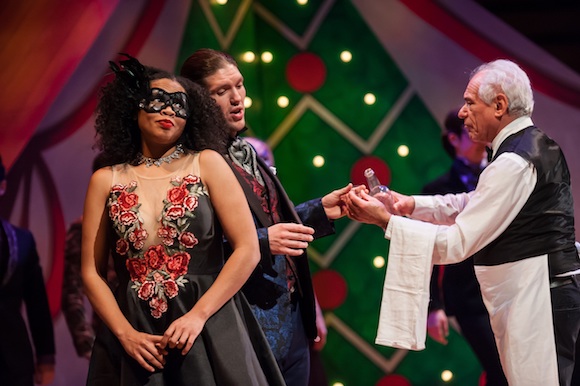 I’m pretty allergic to “play within a play” concepts and to mixing English dialogue with sung German but I thought it worked remarkably well here.  The concept is that Henry, played by Adam Harris, is directing a “semi-staged” version of the work, in which he will come out of singing retirement to play Dr. Falke.  In fact he is taking revenge for the bat joke having been played on him by Ivan who is singing von Eisenstein (Kjel Erickson).  It appears that Ivan’s girlfriend Rebecca, playing Rosalinde, has chucked him in favour of flamboyant Italian tenor Carmelo, playing Alfred (Jacques Arsenault).  But all is not as it appears.  The details would, alas, be spoilers. 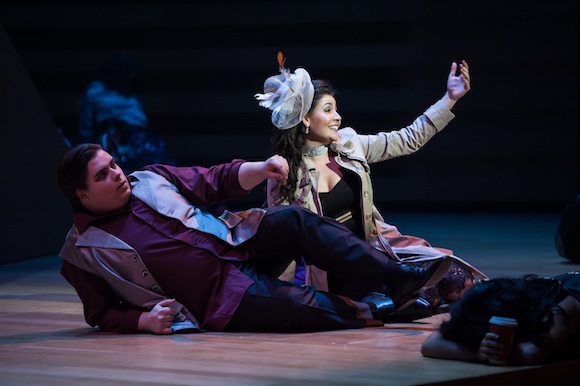 So, Act 1 is played as a rehearsal.  There are lots of opera in jokes.  Henry is bumptious and self centred.  Carmelo is singing off-stage but can’t be found.  The ditzy Viktoria, singing Adele, (Lynn Isnar) is a bit slow on the uptake and the hard pressed stage manager Jessie (Kendra Dyck) has to fill in as Ida because the “real” singer hasn’t shown up.  It works pretty well.  The Act 1 big numbers are all there but the dialogue is quite dramatically shortened.  Act 2 is played more or less straight.  There are a few changes as Henry explains the “joke” to Grover, singing Frank (Noah Grove) and summer, playing Orlovsky (Rachel Miller).  All the stuff one expects in an Orlovsky’s party scene is there and it makes effective use of the concert stage.  Act 3 is staged as the morning after a particularly wild cast party.  At first I thought this was the point at which the concept would fall apart (so many “high concept” productions work well for two acts then require non-credible manipulation to pull the plot strands together in Act 3).  There’s a frazzled security guard and there seems no reason why Ivan should have disguised himself as the law student Martin, who has been playing the lawyer Blind (Zachary Rioux), nor is the role of Grover, obviously not a jail warden clear here.  Fortunately it does get resolved in an almost believable way and we get carried to the final curtain on an exuberant finale. 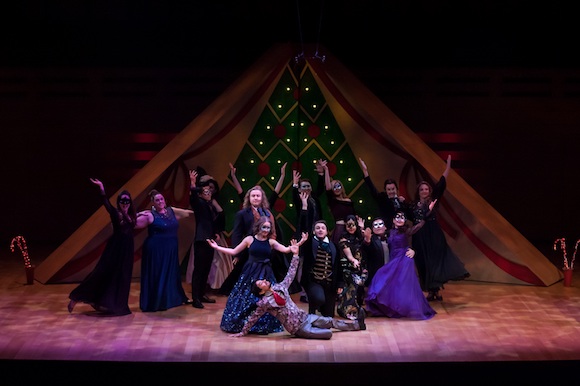 There is some really good singing and acting along the way.  I guess generally it’s the two leading ladies who make or break a Fledermaus and both are excellent here in contrasting ways.  I’m an admirer of Jonelle Sills rich, multi hued voice but I’ve sometimes wondered about her stage presence.  No worries about that here.  She sings the big numbers extremely well but she also manages to command the stage and be really sexy too.  Lynn Isnar is a good foil.  She’s got the coloratura for Adele to spare and is very funny both as the ditzy Viktoria and the haughty whoever she’s supposed to be in the party scene.  Adam Harris has the mannerisms of an English stage director of a certain age down to a T and sings very well to boot.  Rachel Miller’s androgynous Orlofsky is pretty conventional stage Russian  but well sung and effective enough.  Kjel Erickson acts well but sometimes his Ivan/Eisenstein is a bit understated for my taste.  He needed to perhaps be a bit more frightening and physical than he managed in order to create contrast for contrite Ivan at the end.  Jacques Arsenault (sans accordion, a missed opportunity perhaps) was ze classic Italian tenor in manner and sung his big aria quite beautifully. 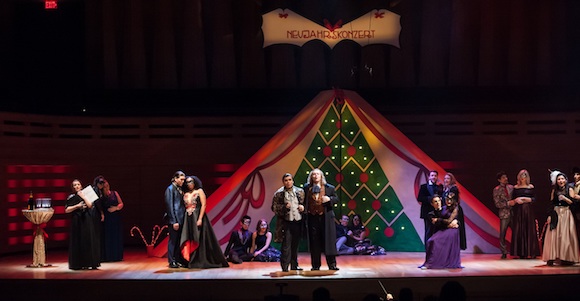 The Conservatory Orchestra produced a suitably Viennese sound for conductor Nathan Brock though the deep Koerner pit and the placement of the percussion section in the second tier at house left occasionally made things sound rather oddly balanced.  The chorus, pretty much the entire GGS vocal programme minus the principals, were excellent making for some spectacular stage movement and vivid sound in the party scene.

This is a fun show.  Ivany is on form and he gets a committed performance from singers who yield little to a fully professional ensemble.  No allowances need be made for it being a student production.  There’s one more performance on Friday at 7.30pm.