In 1884 Ludwig II of Bavaria put on a spectacular outdoor show for his guests at Herrenchiemsee.  It featured perhaps the first use of electric light outdoors in a spectacular lighting plot designed by Edison trained Alois Zettler.  That’s the jumping off point for Des Königs Zauberflöte.  So now imagine, as was not uncommon in the 19th century, that the aristocratic guests had decided to put on a spectacular amateur performance of Die Zauberflöte.  Ok, it’s not that probable that Emperor Franz Joseph and his wife, let alone Otto von Bismarck,would have performed but hang in there.  Now suppose, through some warp of time, space and imagination that the “real” Papageno had shown up and pointed out loudly, and at length, that’s not really what happened.  And so we get Enoch zu Guttenberg’s reimagining of Mozart and Schikaneder’s iconic work that played at Munich’s Prinzregententheater in 2013.

In practical terms this means that after a prologue involving Ludwig and Zettler we launch into a Zauberflöte where all the dialogue has been replaced by commentary by the now elderly Papageno played by actor Gerd Anthoff.  The music is all there and the lyrics for the numbers are unchanged but the rewritten dialogue (Klaus Jorg Schönmetzler) radically alters the piece.  The racism is almost eliminated and “Papageno” takes aim at the sexism and the idealistic pretensions of Sarastro and the Initiates.  “Don’t believe people who believe they have the absolute truth”.  Along the way there’s lots of Bavarians poking fun at Prussians.  Monostatos is played by Bismarck and his slaves are goosestepping officers of the Lifeguard Hussars.  Working out the relationships between who the supposed actors are is quite fun.  Tamino and Pamina are Franz Joseph and the Empress Elisabeth.  The Queen of the Night is the Archduke Sophie, Elisabeth’s actual mother.  Ludwig is Sarastro and so on.  There’s even a von Thurn und Taxis among the Three Ladies.(*) 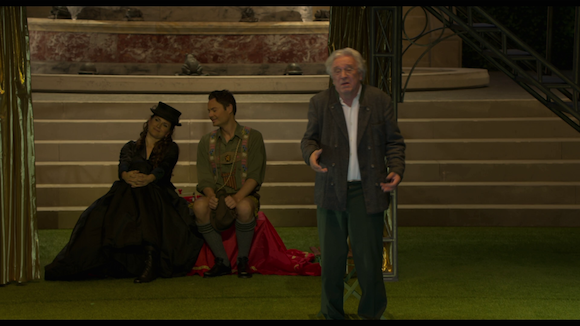 It’s all good fun until around 40 minutes before the end when Papageno tells us that it was Pamina who resolved the war between Sarastro and the Queen of the Night before disappearing leaving us with a long, entirely musical, finale which features, inter alia, Franz Ferdinand and the Prussian Crown Prince in death’s head make up, in the uniform of ordinary soldiers, and carrying the banners of the Dual Monarchy and Imperial Germany conducting Tamino and Pamina through the trials.  It’s often funny but often dark and thought provoking like no other Zauberflöte I’ve seen. 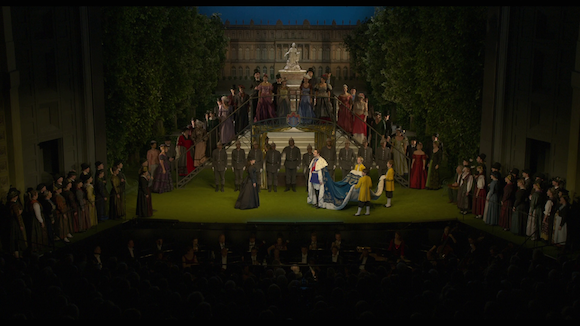 None of the singers are international stars but they are all very good.  If this is  indicative of what one might hear on an average night at the opera house in Bielefeld or Chemnitz, the sort of houses where these singers ply their trade then German audiences are fortunate indeed.  We should be so lucky!  The orchestra is Orchester KlangVerwaltung.  It’s basically a group of musicians who come together from their regular jobs with top notch orchestras to do fun stuff.  They are terrific and though it’s not explicit I’m pretty sure here they are using period instruments.  The chorus is the Chorgemeinschaft Neubeuern and they too are terrific.  Zu Guttenberg conducts as well as directs.

Video direction by Ruth Käch is splendidly restrained and presents a very fair representation of what happened in the the theatre.  She’s backed up by a high class picture on Blu-ray.  The sound options are DTS HD 2.0, DTS HD 5.0 and Dolby Atmos which seems to mean here a 7.1 channel mix.  It’s bordering on spectacular for clarity and presence with a very realistic balance of voices and orchestra.  There is a DVD release as well but don’t!

There’s a fun short intro to the production on the disk and the booklet has a track listing, an essay about the production and the million and oneth essay about how and why Die Zauberflöte came to be.  Subtitle options are German, English, Japanese and Korean. 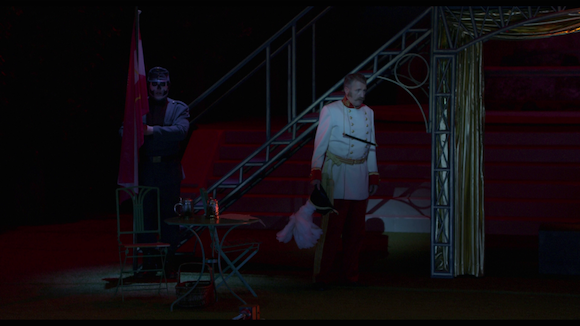 OK, so this has no pretensions to being the starriest Zauberflöte in the catalogue nor is it in any way conventional but it’s fun, thought provoking and very enjoyable.  Recommended.

(*)I first came across the von Thurn und Taxis clan 45 years ago in Thomas Pynchon’s The Crying of Lot 49.  I have no idea why this gang of hereditary mail deliverers give me nightmares but they do and they keep cropping up like Dinsdale Piranha’s nemesis Spiny Norman.  Can it be a coincidence that today is the anniversary of the Kray’s conviction for the murder of Jack “the hat” McVitie?