Claude Vivier’s Musik für das Ende had to wait until 35 years after the composer’s death for its first fully staged performance.  That happened last night at Crow’s Theatre under the auspices of Soundstreams.  It forms the main and concluding part of a really interesting show  directed by Chris Abraham.

The first part of the program is a monologue, Il faisait nuit, of Vivier returning to his Paris apartment and describing his life and his final composition.  Written by Zack Russell and brilliantly played by Alex Ivanovici it’s a French/English piece based on extensive discussions with people who knew Vivier and is said to capture his verbal and physical mannerisms with uncanny accuracy.  It also introduces us to key design elements of the evening.  We, the audience, are lining the walls of a “black box”.  The set is created by lighting effects and there is an electronic sound track.  It’s a very immersive experience.

This is followed by that final piece Glaubst du an die Unsterblichkeit der Seele? (Do you believe in the immortality of the soul?).  It’s a short piece (with a long title) performed here by Owen McCausland and Adanya Dunn with a chorus, synthesisers and percussion and deals with Vivier’s premonition that he will be stabbed to death on a Metro platform.  It’s not a comfortable experience but it does tee up the final piece very well. 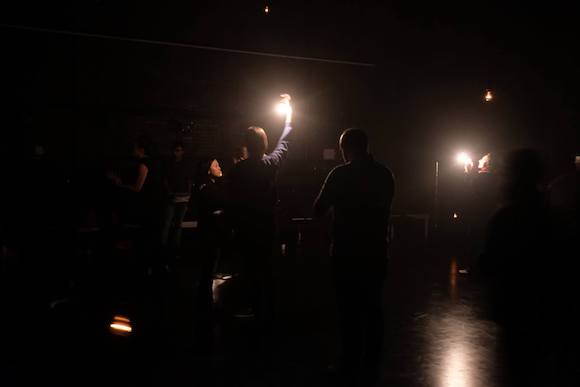 And so to Musik für das Ende.  I’m only able to give anything like a coherent account of this because Keith Lam and Adanya Dunn were kind enough to show me the “score” afterwards and explain what was happening.  There are ten performers who move through the basically dark space with a complex and varied lighting plot made up of overhead light bars and suspended LEDs.  Each performer starts with certain attributes.  Each has one of five mantras and one of five short rhythmic sequences.  They also have a personal “story” and words and music unique to them that they weave in at points in the drama.  Everybody starts chanting their own mantra to their own rhythm and the score instructs them on when they are to swap elements with other performers or come together in groups around one pair of elements.  The performers also play various percussion instruments distributed around the performance space.  There are also synthesizers and percussion.  Music director John Hess has described it as a sort of “purification ritual”.  It closes when a young girl (Hazell Martell-Abramson) walks to centre stage and starts chanting her mantra surrounded by the singers.  They depart leaving her alone on stage.  It’s a very immersive and moving experience.

It should be apparent from this that no two performances will ever be the same.  Different performers will make different choices about mantra etc.  In a sense the “score” is like a set of instructions that are performed on a different set of initial conditions each time.  Equally every audience member will see and hear it differently.  A “story” addressed to the audience on the north side of the room may be completely invisible/inaudible to the audience on the other walls.

You really have to see and hear this to fully grasp what an amazing job the cast and creative team have done in actually realising this piece.  The work involved must have been quite staggering.  It’s worth seeing for that alone but really it’s worth seeing because it’s a unique (an overused term but true here), disturbing and very  rewarding thing to experience.  It continues at Crow’s Theatre until November 4th.

The team, all of whom, deserve the highest praise was made up of:

…and Lawrence Cherney, Artistic Director of Soundstreams for pursuing this to a conclusion.

I’ll add photos when I get them.