Opera Atelier’s remount of Mozart’s The Marriage of Figaro opened last night at the Elgin.  It’s a curious production made up of parts that don’t really fit together, hence the review title.  At the core is a rather elegant traditional production.  It’s wigs and crinolines and might have been seen almost anywhere almost any time in the last fifty years or so.  Most of the excessive baroque gesturing is gone and the acting is stagey but no more so than in many opera productions. 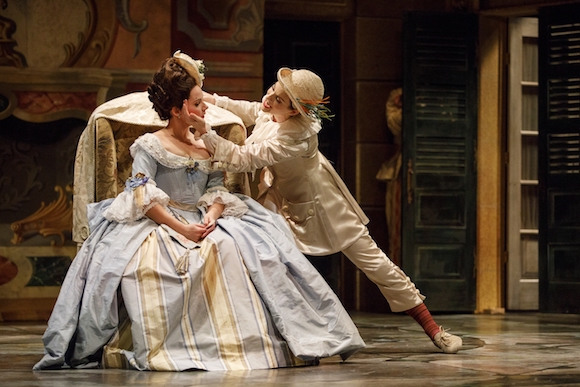 Then there are the elements that seem grafted on.  Director Marshal Pynkoski’s views that Figaro derives from the commedia dell’arte are well known and his first Figaro, as I recall (November 22 to December 1st 1998 at the Royal Alex according to the poster on my wall) was full on with a Harlequin Figaro etc.  Here the commedia elements are largely reduced to Basilio who is in parti-colour costume and runs around like a maniac with a slapstick.  Curzio, also played by Chris Enns, is the same but with a lawyer’s gown and a stutter.

Then there’s the use of the ballet members as stage hands prancing around with tables on their heads.  It’s every bit as mannered as Bartlett Sher’s use of doddery old retainers in the same role in the Met’s Le Comte Ory.  The ballet too makes an appearance but it seems quite out of place.  Twice in Act 2 dancers appear and twirl pointlessly around the count and then in the one scene that clearly calls for dance; the wedding in Act 3, instead of something hinting at the social dance that the music and the situation demand we get a bunch of Dollarama Carmens doing the standard Opera Atelier ballet schtick complete with bloody castanets.  It sticks out like a sore, nay gangrenous, thumb.  All this is a bit of a shame because the underlying production, while hardly revelatory, isn’t bad.

Then there’s the English language translation by Jeremy Sams.  It’s racy and modern and rather better than say Mr. Sams’ Enchanted Island.  It’s a bit too clever for itself sometimes like when Barbarina, at the line usually translated as “I’ll be your little kitten” comes out with “I’ll be your little pussy”.  Most of the time it sings quite well especially in the recits and faster numbers.  Other times it’s more of a problem, especially in the countess’ big arias where tricky consonants and English vowels make it hard to sing beautifully.  We’ll come back to that.

Performances are a bit mixed but generally rather good.  Mireille Asselin is the star as Susanna.  She sings beautifully and moves very well.  She has tremendous physical energy and chemistry with the men; both the one she wants and the one she doesn’t.  It’s a straightforward, largely comic portrayal in line with the rest of the production and it’s great fun to watch.  She’s well matched by debutee Douglas Williams as Figaro who is also very physical and manages his big numbers well.  Stephen Hegedus is a vocally secure count who manages the various moody moods of his character rather well.  Mireille Lebel, as Cherubino, sings her two big arias very well and is quite convincing as Cherubino the boy.  Physically she’s not quite as good as Cherubino the boy-pretending-to-be-a-girl.  She’s just too feminine which is emphasised by a low cut dress that rather obviously isn’t stuffed with two half coconuts. 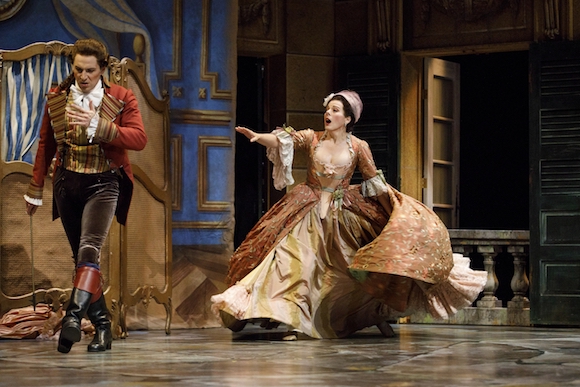 Which brings us to Pegga Kriha Dye’s countess.  I mentioned above that the two big arias aren’t helped by the translation.  They aren’t helped by a thin tone and a bit of a wobble either.  Although the rest of the performance was fine; the duet “To the breezes” was everything we expect for example, and the fact that she looked like a body double for Asselin helped in the fourth act, it’s hard to make up for the two big arias going AWOL.  The minor characters, a mixture of OA veterans and new faces, were all perfectly adequate.  David Fallis conducted with the Tafelmusik Orchestra in the pit.  His tempi were generally on the fast side which suited the production and Tafelmusik produced their characteristic HIP sound which I greatly prefer to a modern orchestra in Mozart.

So, a bit of a mixed bag.  Not quite your typical OA production (except for the interpolated baroquey bits) and with some good performances but with some fairly serious flaws.  YPYMAYTYC. 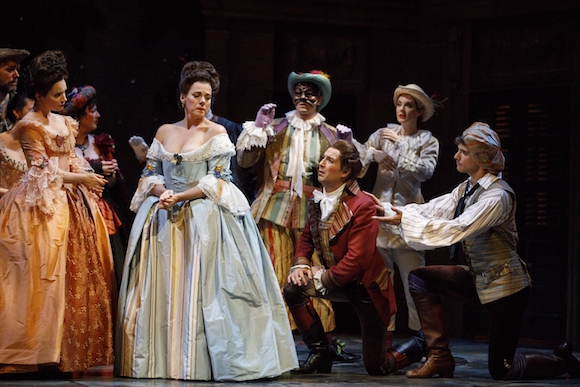