I’m never quite sure what I think about large scale outdoor opera performances but the Macerata Opera festival’s 2016 production of Verdi’s Otello staged in the Arena Sferisterio comes over rather well on video.  It’s a complete contrast with the Salzburg production I reviewed a few days ago.  This is large scale “red in tooth and claw” Verdi.  There is none of the subtlety of the Salzburg performances but it is spectacular and quite exciting.

The production was designed and directed by Paco Azorín and it uses the stage and huge back wall of the arena to good effect.  It uses a lot of rather effective video projections and an interesting lighting plot for an often dark stage scene.  It doesn’t seem to be set in any particular time or place but the iconic imagery of Venice is well represented.  At times it is downright spectacular.  The one directorial conceit is the introduction of half a dozen rather villainous looking “punks” who pop up all over the place; operating a wind machine for the storm, threatening Desdemona as Otello denounces her and even helping suffocate her.  Are they demons?  If so, whose?  The large chorus (Coro Lirico Marchigiano “Vincenzo Bellini”) is handled effectively and are used in interesting ways such as donning a mix of symbolic masks in the trireme arrival scene.  The direction of the principals is effective enough and the fight scene is remarkably well done.

Stuart Neill’s Otello is very much in the heldentenor mode.  He can do it.  He has a suitably “heroic” voice and he manages a reasonable emotional range but subtle it’s not.  Jessica Nuccio as Desdemona is pretty good.  She looks the part and sings quite well though more beautiful voices have sung the role.  She’s dramatically effective and really very touching in the last act.  Roberto Frontali’s Jago is well characterised and quite complex.  He also sings very well.  Of the other characters I particularly liked the imposing Ludovico of Seung Pil Choi.  The chorus is excellent.  They can sing as well as move.  Riccardo Frizza conducts with the Fondazione Orchestra Regionale delle Marche.  It’s a full red blooded sort of sound, full of drama.

Tiziano Mancini directed for video.  It’s a good job.  I suspect this production with it’s huge stage, often dark, was very hard to film effectively but he does it justice.  He’s not afraid of the “arena shot” and while, obviously, a lot of the more intimate parts of the drama are shot in close up we get a good sense of the scale of the thing.  On Blu-ray the picture is good but I might guess that standard DVD would struggle to convey some of the shots.  The DTS-HD sound is also good though perhaps not as spatially solid as some recordings.  The PCM track is just a tiny bit “flatter” but still decent.  There are no extras on the disk.  The booklet has an historical essay and a synopsis but no track listing.  Subtitle options are English, French, Italian, German, Spanish, Korean and Japanese.

I think I prefer the subtlety of the recent Salzburg recording with excellent performances by José Cura and Dorothea Röschmann but this one is good and may be preferred by those who prefer a more traditional “heroic” singing style. 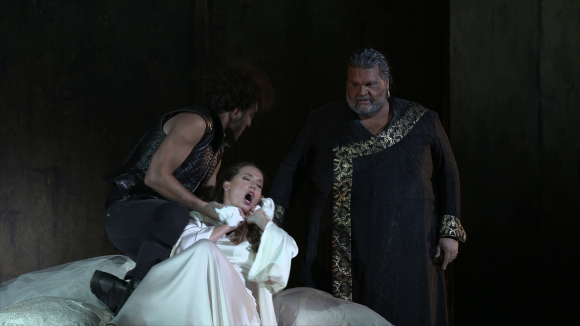