So here is the promised review of last night at the Four Seasons Centre.  I have to phrase it that way because it was more than Somers’ opera Louis Riel though that of course was the major event.  The evening kicked off with a performance in the RBA by the Git Hayetsk Dance Group.  This is a west coast group and I’m not going to try and get into the complexities of nation, lineage and clan involved but it was a moving performance of traditional songs and dance with a brilliantly witty piece involving the trickster raven and a lot of stolen handbags. This was also the beginning of the public conversation about the use of the Nsga’a mourning song in Louis Riel.  That conversation continued when the same group made a brief appearance on the main stage immediately before the opera performance.  I understand that the intent is for the leader of the dancers to report back to the matriarch of the clan that owns the song on what happened and for the conversation to continue from there.

Moving into the main theatre and following both the “dedication” of the mourning song and the formal acknowledgement of the traditional owners of the land on which we were gathering the opera kicked off.  The original taped folk song was replaced with a live performance and so began some serious revision of the the 1967/69/75 version of the opera.  I think the chief differences were three fold.  The most important was the way the chorus was used.  In the original version the chorus, conventionally, plays multiple roles; somewhat promiscuously.  In Peter Hinton’s version there are two choruses.  The “Land Chorus” is silent and omnipresent acting as a native witness to the events.  It’s one of the key ways that native points of view are reintegrated into the story.  The “Parliamentary Chorus”, dressed in modern western clothes, sings and acts both as a “European”observer and in a conventional way as, for example, the Orangemen in the the deeply unpleasant scenes in Ontario.  The second difference is the “expunging “of two scenes that originally played on the stereotype of natives given access to alcohol like a bad 1970s production of Fanciulla.  The first is just toned down, the second sees scenes of drunkenness replaced with a ceremonial Buffalo Dance.  Finally, the whole aesthetic is changed.  The “in your face” hyper-realism of the original is replaced by something more abstract and cerebral.

This is not to say that certain crudities of the original are not retained; for better or worse.  The crude, murderous racism of the Ontario Orange Lodge is not toned down at all and the treatment of Sir John A. Macdonald remains somewhat cartoonish.  Is he really a buffoon or using buffoonery to conceal something much deeper?  Still, the overall effect is to transform a dramaturgy which is essentially about settler Canada in which the indigenous elements are a sort of exotic distraction into a piece that asks whether the idea of two founding peoples ought not to be replaced by one of many founding peoples and two groups of colonists.

Louis Riel is not an easy piece to perform.  The musical language is uncompromisingly modernist (largely twelve tone) and a lot of the vocal lines have little or no orchestral support.  Nowhere is this more true than in the title role.  He who plays Riel must master a variety of vocal styles and sing a lot of difficult music with little support while simultaneously portraying a deeply complex and perplexing character.  Russell Braun manages this remarkably.  People involved in the original production say that Bernard Turgeon inhabited the part so closely that he “became” Louis Riel.  The same might be said of Russell.  The physical likeness is extraordinary and his rather more beautiful voice adds an additional dimension to the character.  Director Peter Hinton’s use of flame to suggest a certain basis for Riel’s visions helps bring about this filling out of the character.  It’s one of the best things Russell has done in Toronto.

The cast is huge so it’s very difficult to do more than cherry pick among an excellent supporting cast.  Allyson McHardy certainly deserves a mention for her very beautiful portrayal of Riel’s mother, particularly poignant in Act 3.  Simone Osborne, as Riel’s wife, has but one scene but it kicks off the very exposed Kuyas and then morphs into some really complex and taxing ensemble work; all of which was brought off with great skill.  James Westman manages at least to make Macdonald ambiguous rather than merely cartoonish and Alain Coulombe is a truly dignified Taché.  Michael Colvin is thoroughly convincing as the really ghastly Racist Orangeman Scott.  But really, there are no weak links and the choice at the end to take mostly collective curtain calls seemed appropriate. 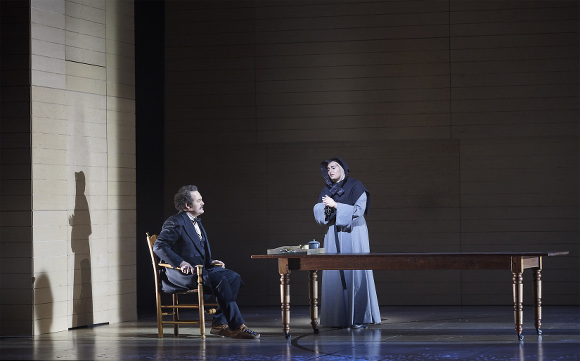 Both choruses; the new to opera silent one and the perennially excellent COC regular one  were impressive.  The orchestra, especially the percussion section, was heroic and Johannes Debus kept an iron grip on the pacing and structure of this very complex piece. 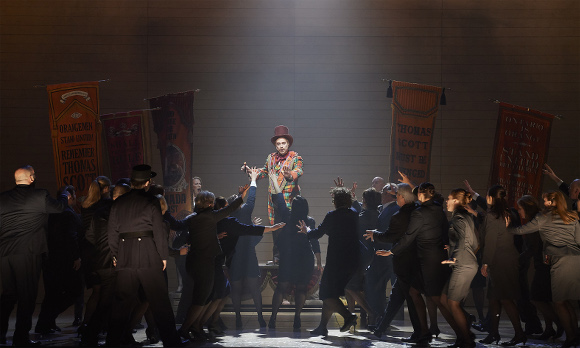 I don’t think Louis Riel is perfect.  It may not even be the “great Canadian opera” but it is a piece of considerable power that tells an important Canadian story.  Peter Hinton (and team)’s imaginative reconstruction of the piece makes it a provocative contribution to the sesqui and a piece that anybody who thinks about how the arts can play a role in Canada’s future, especially in the vexed area of indigenous and settler relations, needs to see.

Louis Riel continues at the Four Seasons Centre until May 13th.

Photo credits: Michael Cooper except the first one which Katja took on her phone.