Sven-Eric Bechtolf’s stagings of the Mozart/da Ponte operas in Salzburg concluded in 2015 with Le nozze di Figaro.  I think it’s the most successful of the three.  Bechtolf’s strengths lie in detailed direction of the action rather than bold conceptual statements and Nozze is probably the least in need of, and the least amenable to, the big Konzept.  There aren’t any real dramaturgical problems to solve.  It just works as written.  I don’t think that’s so true for Don Giovanni or Così.

What we get is a pretty straightforward staging set in an English country house in the 1920s.  Mostly this works pretty well as a setting but I do wish designers and directors would get the details right when they choose such settings.  Obviously an English aristocrat of this period couldn’t have “owned” a regiment that he can pack a troublesome youth off to but if he did it would probably be a British one, so why put Cherubino in a cod French uniform?  You can actually pretty much play continuity card bingo with this production.  That’s essentially nit picking though and there is plenty to like between the face palms.

For the first three acts the production uses a multi room set on two levels.  Only in Act IV does the whole stage get used as a whole; as a sort of greenhouse as it happens.  This device of course allows for acting by characters who otherwise wouldn’t be on stage; like Sussana locked in the closet or the Count and Antonio crawling through the cellars looking for Cherubino.  There are also some typically Bechtolf embellishments.  Cherubino has a portfolio of drawings of the ladies of the house in various states of undress.  The Count and Countess fool around dangerously with a shotgun(*). The disguises in Act IV are actually quite convincing.  The one bit I didn’t “get” is the characterization of Barbarina who is weirdly tomboyish.

The casting is very apt.  Everyone looks, feels and sounds right.  The Figaro, Adam Platchetka, maybe looks slightly older than one expects nowadays but he’s a very fine singer and actor and, ultimately is very convincing.  His Susanna is Martina Janková who sings well and creates a persona that hovers between deferential and familiar in an interesting way.  Luca Pisaroni and Annett Fritsch play the Almavivas.  Again they feel right as the characters.  In particular, Fritsch conveys an air of quiet, aristocratic, suppressed desperation somewhat reminiscent of Schwarzkopf.  Her Dove sono is heartbreaking and we see the deep sadness again right at the end.  There is no sense of triumph in her snaring of her husband.  She doesn’t smile even as she takes centre stage during the final ensemble.  In fact, as the other characters start the wedding party she walks slowly and sadly away.  Only when her husband comes after her and escorts her to the festivities does some small sign that she believes in the possibility of happiness emerge.  This, I think, is the kind of thing Bechtolf does best. 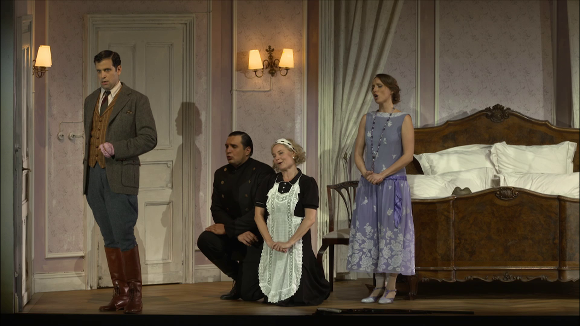 The other roles are all fine.  Margarita Gritskova is rather a likeable and quite masculine Cherubino.  Ann Murray, 65 when this was recorded, is a very characterful Marcellina (though her aria is cut) and is well matched by Carlos Chausson’s quite refined Bartolo.  Christina Gansch sings well as Barbarina and I guess she’s doing what she’s supposed to even if it feels a bit odd.  Tristan Pisaroni makes a brief cameo in Act 1 probably becoming the first dog to be credited in a Nozze production.  Dan Ettinger conducts from the forte piano with the Wiener Philharmoniker.  Sometimes his tempi seemed a bit slow to me; in Voi che sapete and in the finale for instance, but the recording comes in at a standard 190 minutes which is 10 minutes faster than the Harnoncourt/Guth version and, anyway, the slow tempo at the end is quite beautiful. 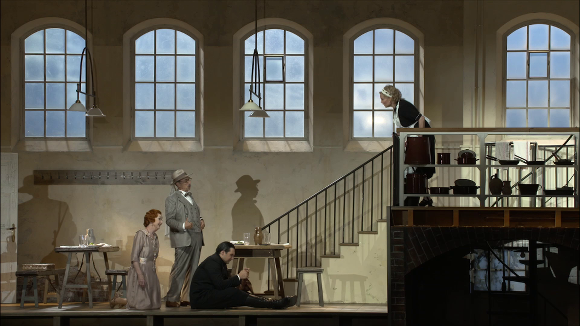 Tiziano Mancini does a very decent job with the video direction which is always tricky with a multi-room set.  The technical quality on Blu-ray is first class.  The surround sound is very good and the picture holds up even in the rather dark final act.  There’s an interesting extra on the disk.  Besides surtitles one can select explanatory pop ups which appear at appropriate times to clarify a plot or production point.  This feature is available in English, German and Chinese.  I found I didn’t use it much but it might be handy for someone less familiar with the piece.  The booklet contains a track listing and an essay by Katrin Haase which doesn’t cast much light on the production, and maybe there isn’t much to be cast.  Subtitle options are English, French, Italian, German, Spanish, Chinese and Korean. I see too from checking Amazon listings that there is a 4k Ultra HD version also available which is likely an opera first. I don’t have the equipment to deal with that even if I could get my hands on a copy but if anyone has your thoughts would be appreciated.

There’s a lot to like in this performance and it’s well captured on disk.  I think it joins Guth’s classic Salzburg production as one I could see myself revisiting.

Did I find any common threads running through Bechtolf’s versions of the three operas?  Not really, though there is a common attention to detailed characterization and a liking for carefully composed stage pictures.  There’s certainly less to unite the three works than in Guth’s cycle. 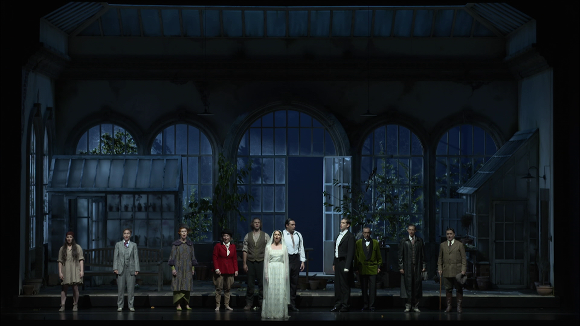 (*)To anyone brought up in rural England the cavalier way that firearms are handled will appear as shocking as if the count and countess had decided to fight a duel with crucifixes.