Naomi’s Road; music by Ramona Luengen, lbretto by Anne Hodges, has been around as an opera for ten years or so and it got its Toronto premier last night at St. David’s Anglican Church in a production directed by Michael Mori for Tapestry Opera.  It’s based on Joy Kogawa’s novel for children of the same name which tells the story of Naomi and her brother Stephen; Japanese-Canadian children torn from a comfortable middle class Vancouver home by the WW2 era Canadian government’s policy of interning Canadians of Japanese descent as “enemy aliens”.  It’s a shameful story and one that Canadians need to know about in an era when fear of the “other” is being stoked on all sides.  Perhaps we like to look down our noses at the antics of our neighbours to the south but our own history has its dark side and we need to remember.

The piece was created for young audiences (it’s done extensive school tours in BC and Alberta) and it’s very much of that genre.  Story telling is privileged over musical pyrotechnics and it’s designed to be packed in the van and easily resurrected in a school gymnasium or assembly hall.  It does the job.  The piano score is straightforward and accessible only occasionally moving into more dissonant territory.  The vocal line is designed for comprehension in a setting where surtitles will not be available.  There were none last night but I had no difficulty following the words even when multiple high voices were involved.  The staging is similarly efficient.  Last night’s production made maximum use of the tiny St. David’s stage with a set of folding flats that were repeatedly and rapidly reconfigured to provide appropriate backdrops and a handful of props. 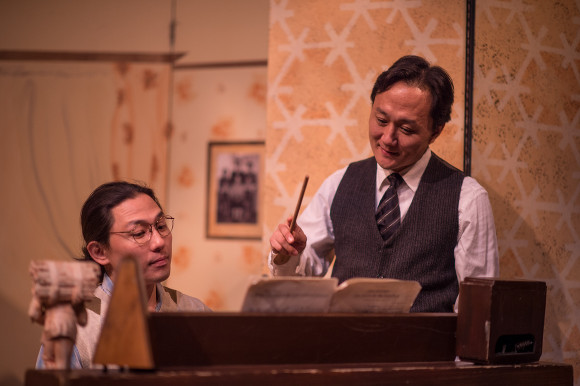 Naomi and her brother Stephen were sung by Hiather Darnel-Kadonage and Sam Chung.  With mature adult voices one has to work a bit to remember how young the children are supposed to be (10? 12?) but there’s an appropriate freshness and naivety to their performances that helps a lot.  The other male roles are taken by Sung Taek Chung and the other female roles by Erica Iris.  Both of them do a rather good job of swapping back and forth between adult and child roles which they have to do multiple times.  Stephanie Chua provided the piano accompaniment.

Kogawa’s message is ultimately one of hope.  “There is always giving and forgiveness… children’s gifts can survive”.  The opera version faithfully conveys that message.  I hope she’s right.

Naomi’s Road plays at St. David’s Anglican Church, 49 Donlands Avenue.  There are performances tonight through Saturday at 8pm and a 2pm matinee on Sunday.