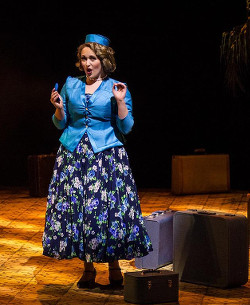 Today’s lunchtime concert in the RBA featured the assembled students of UoT Opera in a staged programme called The Art of the Prima Donna.  It was a sequence of mostly ensemble numbers drawn from the core 19th century rep.  Verdi, Tchaikovsky, Puccini, Donizetti, Bellini, Bizet and Rossini all featured with works made famous by the great divas of the era’ Patti, Pasta, Malibran etc.  Linking narrative, which skipped over who slept with Rossini, was provided by Michael Albano who directed the staging with Anna Theodosakis.  Sandra Horst headed up the musical side and accompanied with help from Sue Black, Kate Carver and Ivan Jovanovic.

It’s always interesting to see the university and conservatory shows early in the season as they tend to be pointers to who is going to “emerge” onto a bigger stage; especially with COC Ensemble Studio places at stake in just a couple of weeks time.  The last couple of years it’s been the men, largely, who have stood out.  This time it was very much the ladies.  Stand out for me was Danika Lorén who featured as Mimi in the break up scene from Act 3 of La Bohème.  There are colours emerging in her voice that are really interesting and raise things above the run of decent young lyric sopranos.  Good actress too.  Kristina Agur also impressed with Akh, istomilas’ ya gorem from The Queen of Spades.  Power to burn here and interesting colours too though she’s still not entirely in control of her upper register.  That’s a common enough problem and can likely be fixed.

Two mezzo sopranos also caught my attention.  Megan Quick was really impressive singing the Adelgisa side of Mira, o Norma.  She was accurate, smokey and very interesting to listen to.  Then there was Lyndsay Promane as Carmen in Nous avons en tēte une affaire!  It’s a bit hard to judge someone in such an ensemble setting but I liked the colours of the voice and she’s got real stage presence married to the kind of looks that don’t hurt at all, especially in a role like Carmen.  Is the voice big enough for the opera world of three thousand seat houses?  I’m really not sure.  I guess time will tell.

There weren’t any obvious Andrew Hajis or Charles Sys among the gentlemen this year but there were some pretty decent singers.  Daevyd Pepper showed a fair bit of power as Rodolfo opposite Danika and Matthew Dalen made a suitably ardent Almaviva though the acting was distinctly Looney Tunes.  I assume that was as directed because the whole scene felt like all it lacked was Elmer Fudd.

All in all, a very good show and, as ever, lots of talent on display.  As always I’ll be curious to see how my. and everyone else’s, judgement has shifted by the spring.

Photos scrounged up from around the web.