The 2011 production of Handel’s Alcina at the Wiener Staatsoper marked the first time Handel, or any other baroque work, had appeared in the house since Karajan’s reign in the 1960s.  In mounting it they went big.  There’s a starry cast headed by Anja Harteros, Marc Minkowski and Les Musiciens du Louvre – Grenoble, a large group of dancers and former Royal Shakespeare Company boss Adrian Nobel.  It paid off.

Alcina is an unusual work.  It was Handel’s one attempt to write a grand opera in the French manner, albeit with an Italian libretto.  There are lots of dance numbers; mostly of a fairly stately nature and, of course, a tale of a sorceress who turns men into beasts affords ample opportunity for the kind of stage effects 18th century audiences loved.  For me it was also interesting to see it presented more or less uncut after the heavily truncated version seen at Opera Atelier. 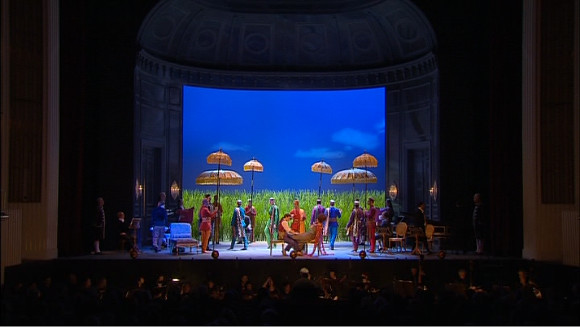 Nobel is on record as wanting to present the work within an 18th century aesthetic and his device is to have it presented as if Georgiana Cavendish and her circle had created a private version at Devonshire House.  I’m not sure that knowing that the singer singing Melisso is supposed to be Charles James Fox adds much but it does allow for staging in 18th century dress in a candle lit Georgian salon (which opens out through the back wall into a surprisingly effective, brightly lit cornfield).  There are also lots of on-stage musicians and footmen to hand props around etc. The lighting, by Jean Kalman, really brings it alive and it really looks rather wonderful and works well with the music. 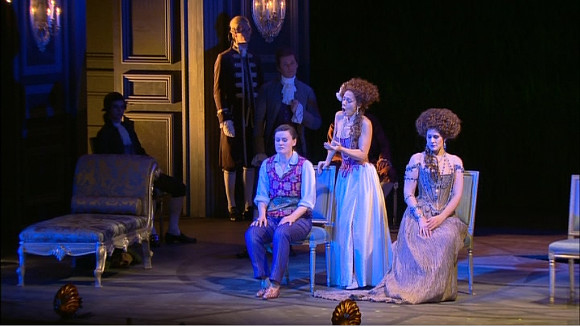 Naturally enough things rather revolve around the Alcina of Anja Harteros.  She is just wonderful.  She sings with supreme control and elegance and complete mastery of the idiom.  She’s also totally convincing as an actress, exuding a dangerous and seductive sexuality.  This is one of the best performances I’ve seen on an opera stage.  Her Ruggiero is Vesselina Kasarova who has a wonderful dark mezzo but maybe hams things up a bit physically.  Bradamante is Kristina Hammerström.  She’s a mean singer too and dramatically manages the transformations involved in a woman singing a man who turns out to be a woman with great sensitivity.  There’s lovely work too from Veronica Cangemi as Morgana.  She even looks like she could be Alcina’s sister!  Benjamin Bruns as Oronte and Adam Plachetka are also pretty good.  Finally, a word for Alois Mühlbacher in the boy soprano role of Oberto.  He’s fantastic!  I doubt you will ever see a better performance from a boy soprano on an opera stage.  He has real depth and power in the voice and he manages the technical aspects extremely well.  He had me going to check the cast list to see if they had slipped an adult woman soprano into the role. 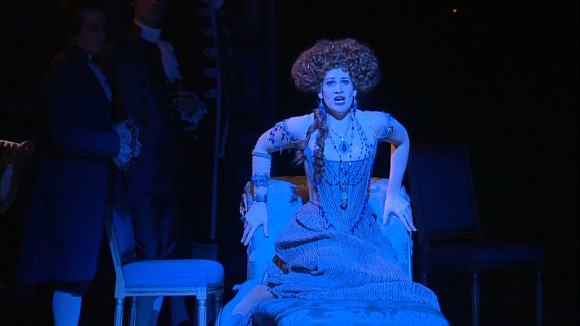 The musicians on period instruments sound thoroughly Handelian in a way modern instruments just don’t.  Minkowski does a really good job too of marshalling a complex mix of off and on stage instrumentalists plus everyone else.  The dance is well integrated into the whole with decently varied but not outré choreography from Sue Lefton.  There are enough bare male torsos to keep OA fans happy (and even a bare female one).  The singers get in on the act in the finale when everyone gets to take part in a series of triumphal contra dances.

Matthias Leutzendorff directs the video and it’s a bit of a mixed bag.  I think he captures the overall aesthetic quite well but he’s much too fond of the videographer’s bag of tricks. Harteros’ brilliant rendering of Ombre pallide doesn’t need a bunch of fades and superpositions.  It was filmed in HD and the picture quality is good to excellent on DVD.  The sounds fine too but offering a Dolby surround track is a bit 1990s.  The Blu-ray is 1080i with DTS-HD sound and has to be a better bet.  There is a decent “Making of” feature included along with some trailers.  The booklet has some good explanatory material and a synopsis but no track listing.  Subtitles are English, Italian, German, French, Spanish and Korean.

This is a fantastic recording by any standards.  The only competition is a 1999 Stuttgart version that cuts at least 45 minutes.  Handel and Harteros fans will want to see this one.