The production is given a contemporary setting on a two level stage representing some sort of apartment building.  Besides the characters who appear in the libretto there are a number of silent characters introduced by the director.  These include what appears to be Grimoaldo’s “bit on the side” and Unulfo’s wife and kids.  The whole gang is more reminiscent of some organised crime outfit than a royal palace but that works well enough.  There’s a fair amount of deliberate humour and some playing around with the conventions of opera seria.  There’s a good example at the beginning of Act3 where Eduige has given Unulfo the map and keys he needs to spring Bertarido.  She obviously wants him to get on with it but he’s more interested in singing his aria.  She finally gets him off and he disappears down the stairs singing the B part of the aria at the top of his voice while she gestures desperately at him to shut up.  There also seems to be a lingerie contest going on between Eduige and Rodelinda.  It’s rather a matter of whether one prefers perky brunette sopranos or Junoesque blonde mezzos.  So, there’s lots going on and it really doesn’t drag which, dramatically, is all I ask from a Handel opera seria.

There are some pretty decent vocal performances.  Bejun Mehta is just about perfect as Bertarido and pretty much brings the house down with Vivi, tiranno.  Kurt Streit is strong as Grimaoldo and Malena Ernman copes very well with the very low tessitura of Eduige.  Danny de Niese sings Rodelinda and it’s the usual Danny in Handel performance.  Not the biggest or creamiest voice ever but bright, agile and intense.  Konstantin Wolff is a solid enough Garibaldi.  Matthias Rexroth as Unolfo is the other counter tenor.  He sounds a bit thinner than Mehta but that’s an OK fit with the role. 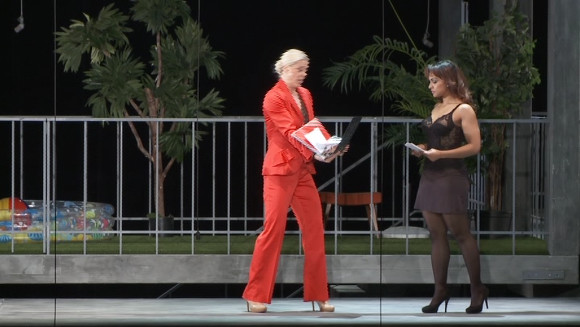 The acting is really interesting.  A lot here turns on Malena Errnman and how one views her acting.  Is she overdoing it?  It sometimes seems that way on DVD (but probably less so in the house) but it’s pretty compelling if not terribly subtle.  Streit is great as the conflicted Grimaoldo and Wolff is impressively evil.  De Niese and Mehta are pretty much typecast.  He’s the dreamy intellectual toss’d on the winds of fate and she’s perky sex kitten.  Both of which work fine in this piece in this production.  The band sounds thoroughly idiomatic as one would expect.

The video direction by Paul Landsmann is judicious.  We can see what’s happening with the moving two level set but we also get close enough to appreciate the acting.  The picture quality is perfectly adequate too.  The only sound option is PCM stereo which is pretty odd for a 2011 recording.  It’s quite decent though.  Subtitle options are Italian, English, German and French.  There are no extras on the disks but there is a pretty good interview with Harnoncourt junior in the booklet which also contains a detailed track listing and synopsis. 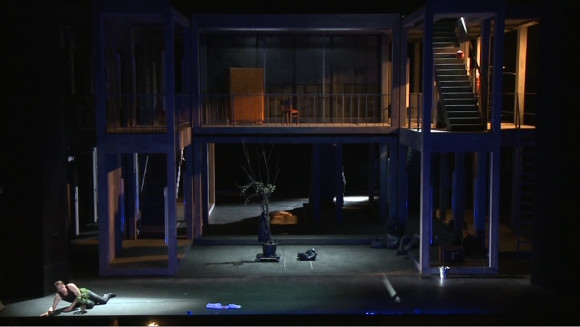 This is very different from either the 1998 Glyndebourne recording which is interesting in an artsy sort of way but is showing its age or the more recent MetHD version which features a starry cast in a traditional period production.  I enjoyed Harnoncourt’s concept and the performances he got from his cast but some may find it contrived. 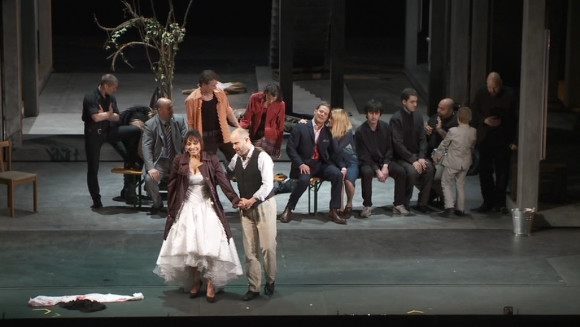 1 thought on “The Harnoncourt show”