The 2013 recording of Poulenc’s Dialogues des Carmélites from the Théâtre des Champs Elysées has a cast that reads like a roll call of famous French singers; Petitbon, Piau, Gens and Koch are all there.  Throw in Rosalind Plowright and Topi Lehtipuu and one gets some idea of the star power on display. 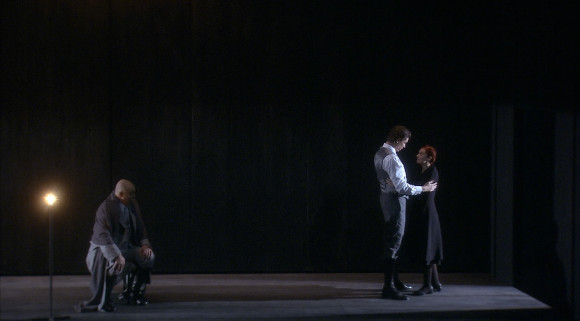 The vehicle for all these stars is a production by Olivier Py.  It’s modern, monochrome and rather abstracted.  It’s also, ultimately, straightforward and undistracting.  Just occasionally it seems to be making some sort of statement.  There are some chalked slogans; “Egalité devant Dieu” etc that seem to be making some sort of point about the the relationship between religion and the ideals of the Revolution.  There’s a sort of tableau vivant of the Crucifixion just before the final martyrdom scene.  That scene is handled by having the nuns at the front of the stage holding hands.  Each time the blade drops one peels off and walks off upstage.  Effective enough.  So it’s elegant and functional but lacks the menace of Robert Carsen’s famously intense and claustrophobic production. 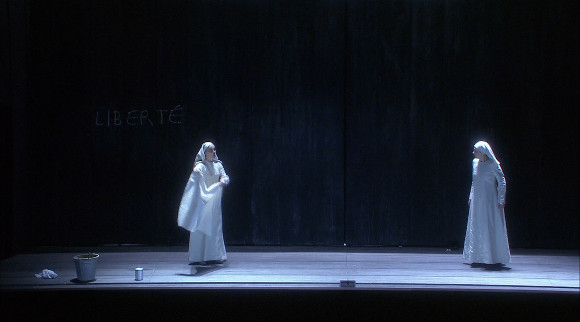 The strength of the production lies in the Personenregie and some very fine performances from both a singing and acting perspective.  At the heart of it is Patricia Petitbon as Blanche de la Force.  It’s the intensity.  The only other singer I’ve seen invest a character with so much energy and presence is Natalie Dessay.  Her acting is remarkable and her bright, almost brittle, voice seems perfect for her not quite-of-this-world character.  The other stand out is the Mère Marie of Sophie Koch.  She captures the chilling sense of righteousness of the character better than anyone else I’ve seen.  There are very solid performances too from Veronique Gens as a stately Madame Lidoine, Sandrine Piau as the slightly loopy Soeur Constance and Rosalind Plowright as the tormented Madame de Croissy.  Among the men there are fine performances from Topi Lehtipuu and Philippe Rouillon as the de la Forces and, especially, François Piolino as the Confesseur.  He has a rather lovely tenor voice and is a fine actor.  I’d like to see more of him. 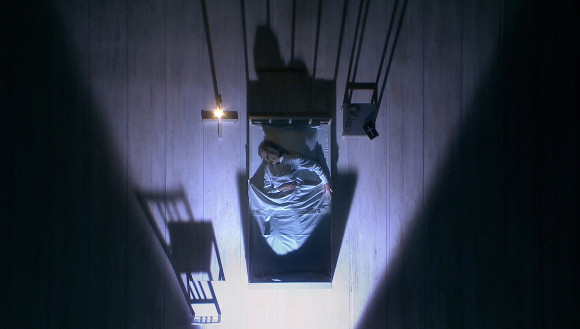 Jérémie Rhorer conducts with the Philharmonia Orchestra in the pit.  He’s fine but doesn’t create the intensity that Muti managed at La Scala.  The Choeur du Théâtre des Champs Elysées, hidden most of the time (I think they are upstage dressed in black but it’s hard to tell on the recording) are rather good.

The picture on Blu-ray is fine and it needs to be as this is a pretty dark production much of the time.  It’s not absolutely crucial as video director François-René Martin films most of the action in close up.  I think this is justified.  The production is quite static and there’s some serious acting going on.  He also uses some odd angles; for example in de Croissy’s death scene but, for once, they seem perfectly justifiable.  The sound options are Dolby 5.1 and LPCM stereo.  It seems odd that, on Blu-ray, one of the HD sound formats wasn’t used but the surround track sounds very good, if not quite demonstration quality.  There are no extras on the disk and the booklet contains just a synopsis, albeit more detailed than usual.  Subtitle options are English, French and German.

To my mind the Carsen/Muti La Scala recording remains first choice for this work but this disk is well worth a look for the performances, especially Petitbon’s Blanche.