Phyllida Lloyd’s 2000 BBC film of Britten’s Gloriana, based on her production for Opera North, is quite fascinating.  The bonus interviews reveal the utter disdain for films/videos of stage opera productions held by pretty much everyone involved in the project.  It’s an interesting perspective to hear in a world where Cinema and streaming HD broadcasts are increasingly common and where Blu-ray/DVD has clearly overtaken CD as the preferred medium for opera recordings.  In some ways, of course, it’s because the technology has improved enormously.  DVD was still relatively new in 2000 and widescreen, flat screen TVs were yet to come.  In any event, this attitude led to the creation of a rather interesting film. 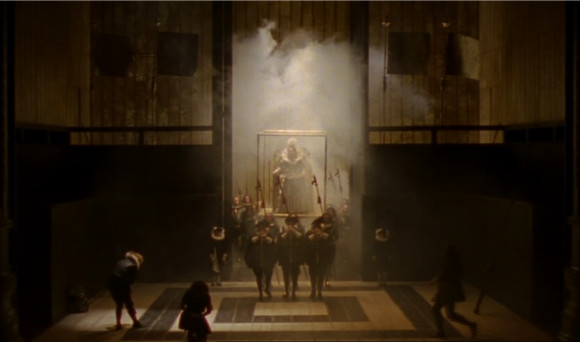 The opera is severely cut (at least an hour gone) and focuses almost exclusively on the central relationship between Elizabeth and Essex.  This is used as a vehicle to focus on the dualities in Elizabeth’s life.  Sovereign Prince versus woman with feelings.  The public spectacle of being a 16th century monarch versus her “private” life.  The essential loneliness of being a queen in a thoroughly claustrophobic and emotionally overheated court.  Lloyd takes this on by filming some scenes in a “theatre” in front of a live audience and others “backstage” or in Elizabeth’s “dressing room”.  Actually it’s all shot in a studio with pre recorded orchestra but that’s how it presents.  Adding vastly to the effect is a magnificent performance by Josephine Bairstow as Elizabeth.  As a grande dame at the height of her powers but obviously nearer the end of her career than the beginning, she seems marvellously able to empathise with the aging queen.  Tom Randle is a wonderful foil as the impetuous Essex.

The staging the film is based on is well suited to the adaptation.  It’s all set on quite a small stage with towering walls.  The contrasts between the pomp of the public scenes and the less public ones is quite stark and Lloyd uses a highly unusual series of camera angles to emphasise this.  (Apparently it was all basically shot with one camera).  Very effective use is made of a sort of “box”; sometimes on stage, sometimes used as a sort of litter, to emphasise Elixabeth’s isolation and “otherness”.  While this is very much the Jo and Tom show the rest of the cast is very good too as are the Opera North Chorus and the English Northern Philharmonic.  Paul Daniel conducts.

The translation to DVD isn’t bad.  Both sound (DTS and stereo options) and video quality are a bit dated but quite watchable.  There’s a very generous package of bonus interviews which are well worth watching.  There’s an essay in the booklet which puts Gloriana into the context of Britten’s other works.  Subtitle options are English, French, German, Spanish and Italian.

This is well worth a look.  In many ways it is more dramatically compelling than the more recent recording from the Royal Opera House and Bairstow is much more to my taste than Sandra Bullock.  The ROH recording though gives you the full opera in vastly better sound and video quality. 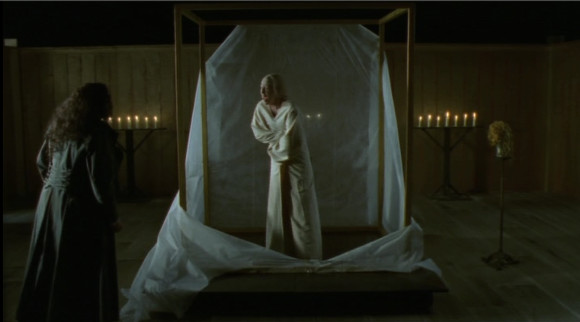