At the Christmas 2012 Against the Grain Christmas party I won a mega box set of Dietrich Fischer-Dieskau goodies which included a couple of DVDs of opera extracts including some footage of him singing the title role in Don Giovanni auf Deutsch.  The full recording from which those excerpts were taken has recently been released on DVD.  It’s a TV broadcast from the opening of the rebuilt Deutsche Oper Berlin in 1961.  It’s the earliest recorded in a theatre, in front of an audience, TV opera broadcast that I have seen.  It wasn’t, apparently, broadcast live.  The recording was made during the final dress and broadcast the following evening simultaneously with the first performance proper.

It’s a fascinating historical document.  Here is Berlin, where the wall has just gone up, declaring to the world the importance it places on the arts.  Not just with a new theatre to replace the one destroyed by the RAF in 1943 but with a great “world” opera; not Fidelio or Die Meistersinger but Don Giovanni.  And it’s in a production by Carl Ebert; his last before retirement.  This, the man who had headed up the Stadtische Oper before being dismissed by the Nazis, who had been the first artistic director of the Glyndebourne Festival and who had returned to Berlin after the war to revive opera there.

So apart from being redolent with mid 20th century history what’s it like as an opera recording?  It’s actually quite fascinating.  Unsurprisingly it’s all rather old fashioned by 2014 standards.  Sets and costumes are extremely literal and the acting style is quite broad though far from just “stand and deliver”.  The story too is told entirely straightforwardly.  There’s no ambiguity about what goes on in Donna Anna’s bedroom or anywhere else for that matter.  The singing too is not quite what we hear in Mozart today.  A good example is afforded by Erika Köth’s Zerlina.  She was 36 when this was recorded which is probably older than any Zerlina I’ve ever seen and the voice is quite mature.  Also she sings with more vibrato than I’d expect today; but it’s a very tight, fast vibrato.  It doesn’t sound like she’s escaped from Puccini but it’s not a sound one would expect Ivor Bolton or Nicholas Harnoncourt to approve of in Mozart.  The Don Ottavio, Donald Grobe, sounds like a lieder singer.  His attention to the text and his clarity of diction are terrific and he does it while still retaining a sense of line.

Fischer-Dieskau’s Don Giovanni is not at all what I expected.  I think I was expecting a lieder type approach here too but not a bit.  He’s Rabelaisian; almost even coarse, he’s a big man and portrays the Don as a superbly confident aristocrat with huge appetites for everything who swaggers through life in a most sensuous way and is really brought up short by the ending.  Walter Berry, by contrast, is a sort of cheeky chappy Leporello.  He’s very funny.  He’s also much shorter than Fischer-Dieskau which affords some comic opportunities in the clothes swapping scenes.  Josef Greindl is a bluff, powerfully sung Komitur and Ivan Sardi, on debut as Masetto, is a pretty straightforward, not very bright peasant.  The Donnas make an interesting couple.  The Anna, Elisabeth Grümmer, is rather good a clean sweet voice who makes the most of her big vocal moents “Ich, grausam?” is lovely for instance.  Elvira, Pilar Lorengar, acts rather well but ius uneven vocally.  She’s rather squally early on but settles down a bit as the work progresses. Ferenc Fricsay conducts and chooses apt tempi and is well served by the orchestra and chorus of the Deutsche Oper. 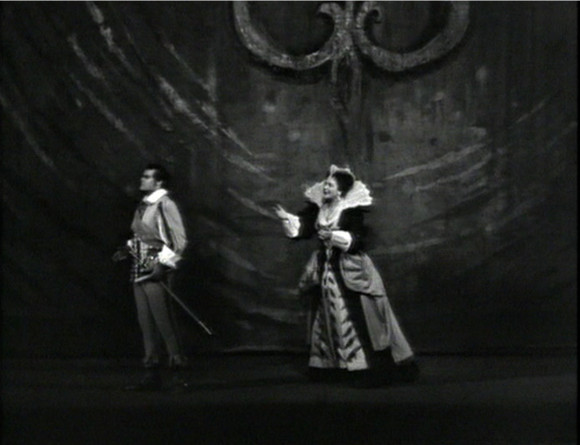 Technically, of course, this is a period piece.  The picture is black and white 4:3 and the sound is mono.  Neither are bad and eye and ear adjust fairly easily.  Rolf Unkel directed for TV and the philosophy seems to be “less is more”.  He actually gives more full stage shots than many modern video directors and there are no gimmicks.  The whole thing feels like the powers that be felt utterly confident about putting the product in front of the TV audience without fancy packaging or patronising commentary.  There are no extras on the disk but the booklet contains a really good essay by Curt Roesler setting out the context.  Subtitle options are German, English, Italian, French, Soanish and Korean.

This is definitely worth a look both as a historical document and as a record of Fischer-Dieskau on the opera stage.