Thomas Adès’ 2004 opera The Tempest was given at the Metropolitan Opera in 2012 in a new production by Robert Lepage.  It got an HD broadcast and a subsequent DVD release.  It’s an interesting work which, on happening, was compared to Peter Grimes as the “next great English opera”.  Whether this early hype will turn into a sustained place in the repertoire is yet to be seen.  Musically it’s not easy to characterize.  Adès very much has his own style; mixing lyricism with atonality and, in this piece, setting one of the roles, Ariel, so high it’s surprising anyone has been found to sing it.  Certainly it’s a more aggressively modern style than most of the work currently being produced in North America.  The libretto two is unusual.  Shakespeare’s own words were, apparently, considered too difficult to sing though, of course, Britten famously set great screeds of unadulterated bard in A Midsummer Night’s Dream.  For the Tempest, Meredith Oakes has rendered the text into couplets; rhymed or half rhymed.  It works quite well with only the occasional touch of Jeremy Sams like banality.

Lepage’s production is set in a fantasy La Scala where Prospero is “staging” his revenge.  Characteristically, there are elements of modern circus with an aerialist sometinmes doubling for Ariel and some grotesque acrobat/dancers.  It’s recognisably Lepage and pretty effective for a piece that has large elements of magic and deception.  There’s a fair bit of what seems to have become a Met staple, the advent calendar placing of the chorus; sometimes on a “backstage” gantry and sometimes in the boxes of fake La Scala.  Costumes are mostly dress uniform though Prospero wears his loosely over serious body art and Miranda gets a sort of hippy outfit. 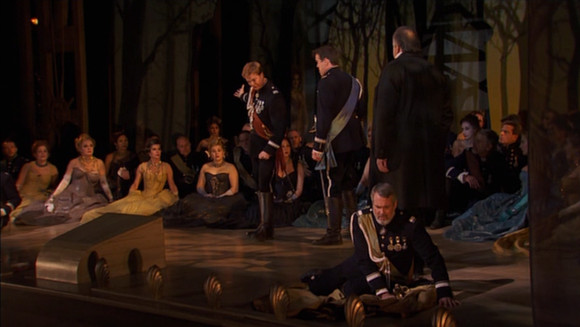 At the heart of the piece is Simon Keenleyside’s complex portrayal of Prospero; an angry, knowing and ultimately accepting character.  It’s quite impressive.  Isobel Leonard makes a fetching and sympathetic Miranda well matched by her Ferdinand, Alex Shrader.  Alan Oke’s Caliban is a bit pathetic; downtrodden with no real malice.  In fact this production, and maybe the work itself, underplays the darker side of Shakespeare’s play.  Toby Spence’s Antonio and Christopher Feigum’s Sebastian are simply too affable to be convincing villains.  Kevin Burdette and Iestyn Evans clown it up pretty effectively as the drunken comic relief; Strefano and Trinculo.  John Del Carlo rather shines as the wise counsellor Gonzalo.  It’s a very sympathetic and affecting performance.  Last, and certainly not least, Audrey Luna gives an amazing performance as Ariel.  The role sits so high I was checking in with the cats to see if she was on pitch.  Not only is it a very difficult sing but she has to do it while giving a fairly extreme physical acting performance, often high above the stage.  It’s really impressive.  The composer conducts and gets  very transparent playing from the Met orchestra; at times intensely lyrical, at others aggressive and strident. 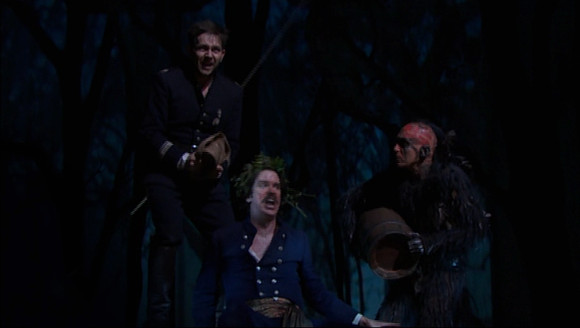 Gary Halvorson directed the video and while he’s reasonably conservative about camera angles there are a lot of times when he’s in close for so long that one is missing a lot of action.  The DTS surround sound is exceptionally good for DVD.  From the very first notes it’s clear the engineers have done a great job.  The picture is good too but not exceptional.  This piece really deserves a Blu-ray.  The booklet has an essay and synopsis but no track listing.  Subtitle choices are English, German, French, Spanish and Korean. 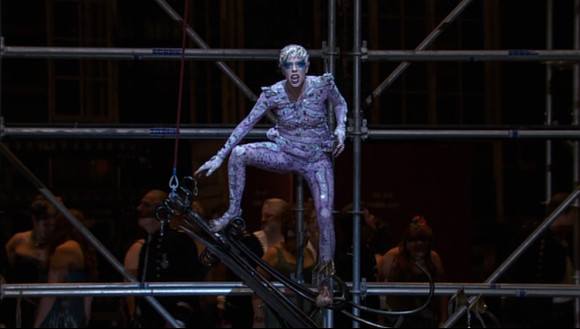 So, I’m not sure that The Tempest is the natural heir to Peter Grimes but in Robert Lepage’s spectacular production it’s well worth a look.