The most obvious feature of Sven-Eric Bechtolf’s Pelléas et Mélisande is the use of dummies to double up the characters.  Much of the time these doubles are lying around or being pushed around the set wheelchairs by the singers.  Most of the time the singers address themselves to one of the dummies even when the “real” version of the person they are addressing is on stage.  I guess it’s designed to create a kind of emotional distancing or dehumanising that does seem in keeping with the piece and, when the convention is broken, ie; characters interact directly, that seems to heighten the drama at that point. 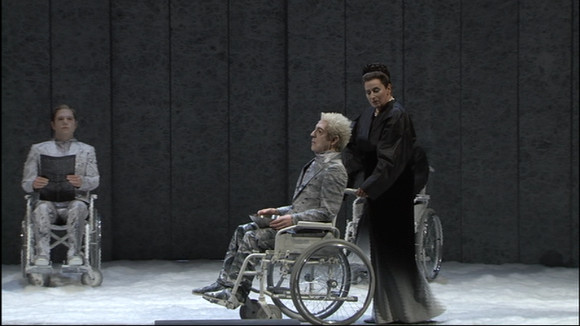 The second feature of the production is winter.  We seem to be in a world of perpetual snow and ice.  The men all wear what looks like winter camo in various forms.  The “tower” in Act 3 is an iced up Citroen.  Besides the snow, the sets are quite abstract.  The “fountain” in Act 2 is a series of fishless aquaria, for example.  The whole effect is of a world of emotional cripples.  There are some interesting, even disturbing, moments.  The “tower” scene is played out by Pelléas and Mélisande without doubles but when Golaud appears with Yniold there is a double of Yniold which Golaud proceeds to dismember.  Similarly, in Act 4, we see Golaud dealing violently with the dummy of Mélisande while human Mélisande looks on.  I’m not sure it’s entirely coherent (what high concept production is?) but it’s interesting and thought provoking.

The cast all seem fully committed to the concept and there’s some very decent singing coupled to very good acting.  I particularly liked the sad, dignified and very well sung Arkel of László Polgár and the the very physical, rather menacing, Golaud of Michael Volle.  The Pelléas is a surprisingly young looking Rod Gilfry.  I’ve always liked Gilfry for his commitment and acting skills even if he doesn’t have the sweetest toned voice and those qualities are evident here.  Isabel Rey is a very adequate Mélisande who rather drifts through the action but that’s the point really.  Eva Liebau is a pretty convincing Yniold.  All the singers have very decent French though perhaps are not quite as idiomatic as the specialists on the Vienna recording.  Franz Welser-Most conducts a clear and atmospheric reading of the score with the support of the always excellent Zürich orchestra and supplementary chorus. 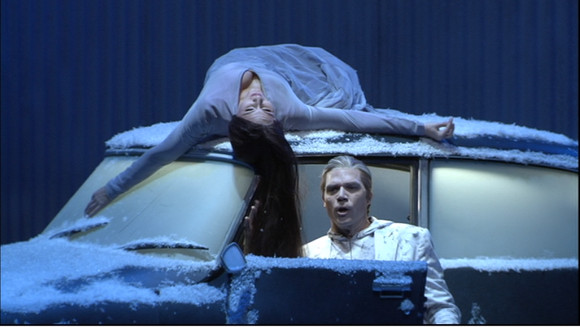 Video direction is by Felix Breisach and it’s very good, especially since this dates back to pre HD 2004.  The picture is DVD quality and the sound (DTS) is clear and transparent which is what this piece needs.  (DD 5.1 and PCM stereo are also offered).  There are no extras and the essay in the booklet has more to say about the work than the production and what it does say isn’t very enlightening.  There are English, French, German, Spanish and Italian subtitles.  ETA 2017: Not pre HD apparently as there was subsequently a Blu-ray release with, unusually, DTS-HD MA 7.1 sound. 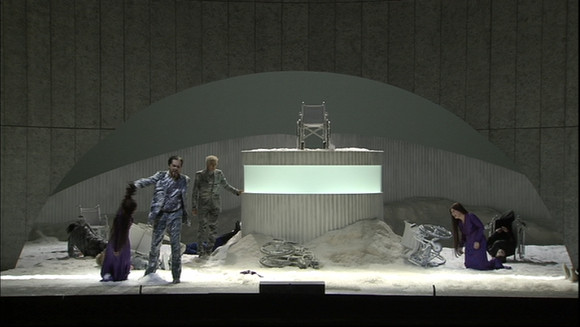 The Vienna recording with a cast of French specialists and a more conventional “Celtic twilight” setting is probably still the first choice recording for this work and is certainly a better introduction to it.  This production though is a different way of thinking about the piece and well worth a look. 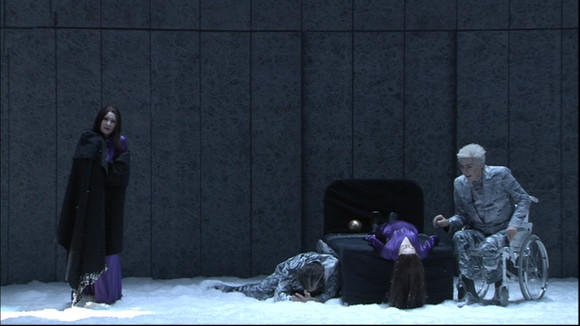 4 thoughts on “Pelléas for dummies”