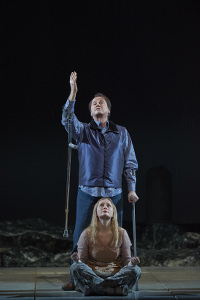 Back to the Four Seasons Centre last night for a second look at Peter Sellars’ production of Handel’s Hercules.  This time we were sitting lower down in the house, in the front, left of the orchestra ring.  As predicted the set wasn’t as effective as when seen from higher up but in some ways the lighting effects were more successful.  Given the house’s acoustic properties favour the rings I’d say this is definitely one to see from somewhere other than the orchestra.

What did I particularly notice compared to opening night?  First off, Richard Croft.  I think I was so wrapped up in Lucy Crowe and Eric Owen’s singing the first time around that I almost failed to notice what a fine performance he gave.  His voice is very mature for a tenor now but he’s a terrific interpreter of text and has flawless technique.  His intensity remains remarkable.  And the schtick with the crutches?  It turns out he recently had hip surgery.

What else?  There’s a scene in Act 1 where the chorus and almost everybody else are partying.  In the dancing, drinking crowd there’s an island of stillness around Hercules and Iole is curled up in a foetal position next to the BBQ.  Also when Dejanira is accusing Hercules of infidelity (and both of them are hitting the bottle pretty hard) Hercules is trying desperately to be physically affectionate but can’t.  In both cases intimacy, even human contact, is impossibly painful.  It’s classic PSTD and if you’ve ever been there you could not fail to be moved.

There’s also the final scene.  I find this enormously problematic.  It’s based on a very 18th century notion of “liberty”.  Hercules is dead and Iole and Hyllus marry in some sort of symbolic reconciliation of something.  What?  Here’s the text:

Priest
Ye sons of freedom, now, in every clime,
With joyful accents sing the deathless chief,
By virtue to the starry mansions rais’d.

To him your grateful notes of praise belong,
The theme of liberty’s immortal song!
Aw’d by his name, oppression shuns the light,
And slavery hides her head in depths of night,
While happy climes to his example owe
The blessings that from peace and freedom flow.
To him. . . da capo

What “liberty”did Hercules bring to Iole or, still more, Oechalia?  The “liberty” Allied bombers brought to Dresden and Hiroshima?  Sellars chooses to play it straight.  It’s about hope for the future and a community reunited.  Is that ever true when we return from brutal and morally questionable war?  Can it ever be true?

2 thoughts on “A second look at Hercules”