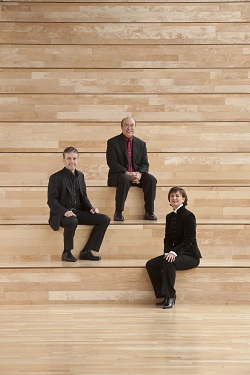 Back to Koerner Hall last night for a concert of chamber music and art song.  Anchoring the show were the Gryphon Trio.  They kicked off with the Debussy Piano Trio in G Major.  This was an enjoyable and compact piece with a very playful second movement.  Then came what was, for me, the main reason for going, Mussorgsky’s Songs and Dances of Death.  For this the Gryphons were joined by Toronto bass Robert Pomakov.  He was excellent.  Obviously completely at home singing in Russian he produced a nuanced reading of text and music.  His acting with the voice was exemplary and no extraneous physical acting was required.  His control of dynamics was exemplary.  He has a really big voice which he deployed as appropriate but he was also capable of floating a lovely pianissimo.  Accompaniment from the Gryphons was also well up to par.  There are some interesting instrumental lines including making the cello go about as low as a cello can to match the bass voice.

Things finished up with the Fauré Piano Quartet No. 2 in G Minor for which the Gryphons were joined by violist Paul Coletti.  This was really quite an inventive piece with the sort of rhythmic drive and repetitions that made me think more of John Adams than Fauré’s contemporaries.  It was another very good performance though I am getting a little tired of the inevitable standing O.