Last night I saw the Canadian Opera Company’s double bill of Zemlinsky’s A Florentine Tragedy and Puccini’s Gianni Schicchi.  I had a pretty good idea what to expect having attended the dress rehearsal a couple of weeks ago.  I said then that I thought that there was something in this show for everyone, even the most traditionalist, and I would still hold to that view if I hadn’t read the very silly review by Arthur Kaptainis in the National Post.  Apparently there are people who can’t cope with a simple change of time setting and there are editors who let them write for real newspapers.  It’s very puzzling.  So let’s just say something for anyone with a smidgeon of imagination or dramatic instinct.

So back to the show.  Director Catherine Malfitano has chosen to set the Zemlinsky in the silent film era and the Puccini in a contemporary setting; both in the same apartment in Florence.  It works fine.  The 1920s setting for the Zemlinsky helps bring out the obvious parallels with Strauss’ Salome; both musically and in terms of it’s ‘moral’ compass.  On the surface A Florentine Tragedy is a simple love triangle/jealousy plot but throughout there’s a frisson of the sexiness of death and violence.  Very Oscar Wilde.  It’s literally and metaphorically dark and there are all kinds of Salome references in the libretto and the direction if one cares to find them.  The Personenregie is well thought out, the acting is good and Alan Held as the merchant Simone sings heroically.  He gets solid support from Gun-Brit Barkmin as Bianca and Michael König as the prince, Guido.  As one might expect, Sir Andrew Davis conjures a lush, even decadent sound from the orchestra.  It’s a fine production and a fine performance but maybe of a work easier to admire than really enjoy. 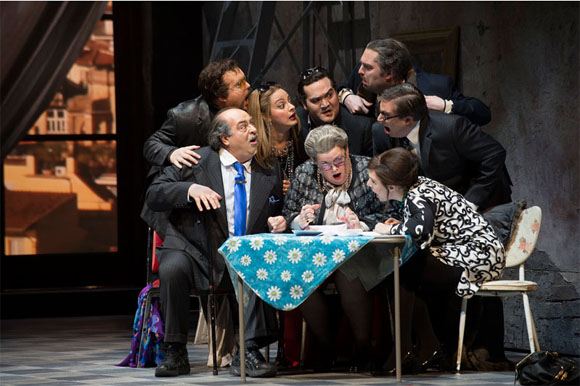 The Donati family study the will.
Photo credit – Michael Cooper

The Puccini is a complete change of mood and pace.  It’s played here as a fast paced, mad cap comedy, albeit not without a touch of pathos.  The apartment is filled with a heap of the dead Buoso Donati’s ‘stuff’ over which the cast clamber in search of the elusive will.  There is lots of light and action as the cast scurry around and perform carefully choreographed expressions of shock and surprise  The comic timing is good, the designs just over the top enough and the sight gags funny without being ridiculous.  It’s good fun.  Held again, as Schicchi, is at the heart of the piece and holds it all together with solid singing and acting.  He’s not a guy I’d peg as a natural comedian but  it turns out he’s pretty good. 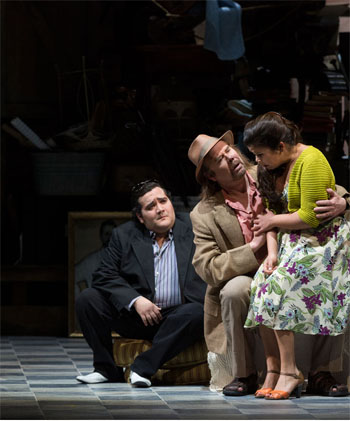 The supporting cast, largely past and present members of the COC Ensemble Studio, really get into the piece with some excellent ensemble singing and acting.  The romantic interest is represented by the ardent and Italianate René Barbera as Rinuccio and Simone Osborne as Schicchi’s daughter Lauretta  She, of course, has the big aria of the night, O mio caro babbino, which was sung with just the right degree of insincerity plus, of course, Simone’s gorgeous tone colours.  Excellent support again from Sir Andrew and the orchestra.  All in all, lots of fun.

There are two performances left in the run; tomorrow and Friday.  If you plan on going I’d suggest getting a ticket soon.  The Four Seasons Centre looked pretty full last night; certainly much fuller than it was for Semele the week before.