So this morning I was at the Four Seasons Centre for the press conference to announce the COC’s 2012/13 season.

Board President Philip Deck started off with a strong statement about continuing to improve the quality of the product on the Four Seasons Centre stage and striving for “uncompromising and inspiring” programming with a goal of becoming “one of the world’s great opera houses”. There are crucial words here. If General Director Alexander Neef is to meet these goals he will need a supportive Board. It looks like they are there with him at least for now and that’s very good to hear.

There was a very good “teaser video” with contributions from the many Canadians who will feature next season. I guess this will be available on line at some point. Then we got to the main business with Alexander presenting the line up. It’s pretty exciting so here it is in all its glory and with my commentary.

This looks like the starry cast block buster “bums on seats” production (though oddly there are only ten performances). Ramón Vargas, Russell Braun, Elza van den Heever and Elena Manistina head up the ‘A’ cast. Marco Guidarini conducts and Charles Roubaud directs the production which originated at Opéra de Marseille.

Johann Strauss – Die Fledermaus
Christopher Alden will direct. Neef announced this as an opera that was written in the wake of a stockmarket crash so I think we can expect Die Fledermaus for the Occupy $anywhere era. Johannes Debus will conduct. The cast includes Michael Schade, Tamara Wilson and Laura Tucker as well as locals Ambur Braid, Mireille Asselin and Christopher Enns.

It’s been well telegraphed that Ben Heppner was going to sing Tristan at the COC so no surprise here. What is a surprise is that Peter Sellars will direct his Paris production with videos by Bill Viola. Jiří Bĕlohlávek will conduct. Melanie Diener will sing isolde with Franz-Josef Selig as King Marke and Alan Held as Kurvenal. The big question mark here is Heppner’s vocal health but I wasn’t ballsy enough to ask who Neef had hired as cover.  Still, Peter Sellars in Toronto is a huge big deal to me. 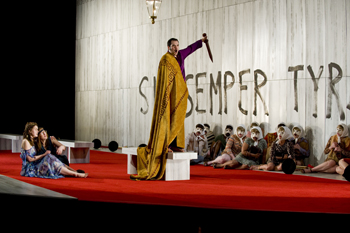 This is one of the Mozart works I most wanted to see in the line-up. Christopher Alden, once again, directs his Chicago production with Johannes Debus in the pit. Michael Schade heads a cast that also includes Isabel Leonard, Keri Alkema, Mireille Asselin, Robert Gleadow and Wallis Giunta. La Clemenza di Tito will also be the production used for the annual Studio Ensemble Four Seasons Centre main stage performance.

This is a revival of Atom Egoyan’s production seen in 1996 and 2002. We are promised that it will be substantially revised for the Four Season’s Centre. Erika Sunnegårdh is in the title role with Martin Gantner and Alan Held sharing Jokaanan. Richard Margison will make his role debut as Herod. Again, Johannes Debus conducts.  OK, Salome isn’t my favourite Strauss opera by a long way but any Strauss is better than no Strauss. 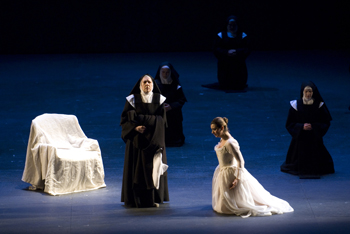 This is maybe the most exciting production of the season. Robert Carsen will direct his production which has already been seen at La Scala, Chicago Lyric and Nederlandse Opera. Isabel Bayrakdarian will sing Blanche so finally, I think, a part suited to her maturing voice. Judith Forst will sing Madame de Croissy and Adrienne Pieczonka will play Madame Lidoine. Hélȅne Guilmette, Irina Mishura, Frédéric Antoun and Jean-François Lapointe round out the cast. Once again Jonannes Debus will conduct.

I think it’s a good balance. There’s plenty of innovation and edge but just enough traditional stuff to appease the die-hards. I guess I do wonder about Debus conducting four of seven productions, especially as that means he’s doing two in the busy April/May window. Certainly there’s nothing here I don’t want to see!

All production photos from the COC press kit.

Can I just say too, in squeeing fan mode, that I was sitting right in front of Michael Schade.

Here’s a couple of photos I took.

Alexander Neef talking to Richard Margison with Michael Schade in the background: