Rimsky-Korsakov’s 1894 opera Christmas Eve is based on the Gogol short story The Night Before Christmas which also formed the basis for Tchaikovsky’s The Tsarina’s Slippers.  We are in a small village in Ukraine just before Christmas.  Basically the smith Vakula is in love with Oksana, the beautiful daughter of the rich farmer Chub.  To complicate matters Vakula’s mother, Solokha, is a witch who is (in the words of the subtitles) “having it off” with every prominent male in the village including Chub plus the Devil. Vakula shows up unexpectedly at his mum’s where she has been hiding successive lovers in sacks as the next (unscheduled) one arrives.  Vakula “tidies up” the sacks but then runs into a big party of villagers where the contents of the sacks are revealed (except for the Devil).  Oksana teases Vakula and says she will only marry him if he brings her the Tsarina’s slippers as a Christmas gift.  Vakula vows never to be seen in the village again and sets off with the Devil in his sack. 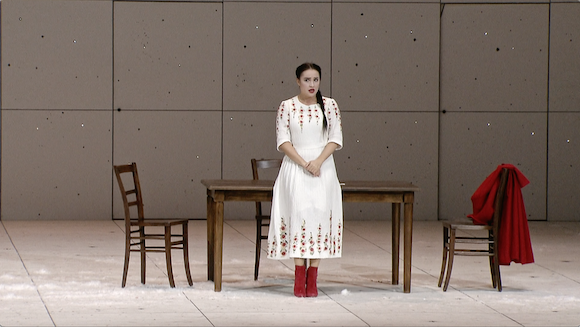 Now it gets sort of mystical.  Vakula encounters the vareniki scoffing demon Patsyuk who is conspiring with various other demonic elements (including Solokha) to prevent the union of the virgin goddess Kolodya with the God of Spring Ovsen which will bring the sun back and frustrate the demons’ demonizing.  Vakula wants to know how he is to get the Imperial Footwear and Patsyuk points out to him that he has the Devil in his power, so off the two of them fly through the night sky to the Tsarina’s court.  She’s rather taken with the young smith and gives him the shoes.  On their way home Vakula and the Devil witness the coming together of Kolodya and Ovsen.

Back at Chub’s house two women are arguing about whether the smith has hanged himself or drowned himself.  Oksana sings an aria about how sorry she is that she teased Vakula and that she would have married him anyway.  Vakula shows up with the booties and claims the desired booty.  Chub gives his permission for them to marry and the whole village celebrates by singing a paean to the writer who will one day immortalize this story of everyday country folk.

Christof Loy’s production for Oper Frankfurt recorded last December and January successfully combines the essence of Rimsky-Korsakov’s story, including the mystical elements, with some striking visuals.  Much use is made of a rather beautiful night sky backdrop.  It’s there when Solokha and the Devil try to steal the moon and when Vakula and the Devil are flying around.  There’s a lot of work on wires especially for those two.  At one point Vakula is high above the stage singing upside down!  There’s excellent use of dance, including classical ballet, Kolodya and Ovsen are both played by proper ballet dancers (Ayelet Polne, who is especially good, and Gorka Culebras).  Dancing by the singers is well integrated with the specialists with Julia Muzychenka, singing Oksana, particularly light footed.

The farce elements are well paced with all the jumping in and out of sacks etc.  The Devil (tenor Andrei Popov) gets a suitably ironic treatment with twirling tail.  The Tsarina’s court is clearly that of Catherine the Great which lends a twist to her apparent infatuation with Vakula.  And much more. Loy’s take on the mystical elements is quite interesting.  He establishes a “spectrum of carnality”.  At one end is Solokha with her extremely physical relationships with her many human and demonic lovers all presented with some humour.  At the other end of the spectrum are the virgin Kolodya and her ethereal mate Ovsen.  This is a purely metaphysical union; a symbol of rebirth and a promise of Spring.  The touching, and very human, relationship between the young lovers falls in between; tentative, monogamous but it won’t be chaste for long one feels.

Musically it’s a late nineteenth Romantic piece with plentiful, and effective, use of Ukrainian folk motifs and grand Slavic church music.  The house orchestra is by turns delicate and suitably majestic.  The cast is mostly Slav and very good it is too.  Julia Muzychenka has a lovely voice and is quite a touching actress.  She moves well and is easy on the eye.  Her big fourth act “regret” aria is lovely.  Besides the aerial acrobatics Georgy Vasiliev as Vakula is a proper tenor with impressive high notes and an almost heroic sound.  Bass Alexey Tikhomirov is physically and vocally imposing as Chub.  He’s also very funny in a somewhat broad way.  Mezzo Enkelejda Shkova as the witch Solokha is both funny and a bit sinister as well as vocally solid.  There are many minor roles and they are all done well.  The chorus and dancers too are excellent.  Sebastian Weigle conducts and keeps everything together and idiomatic even when his singers are (physically) all over the place. 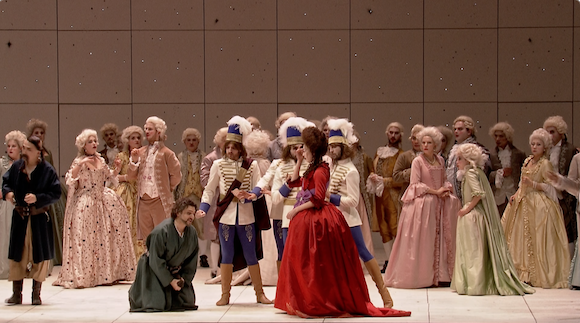 Video direction by Myriam Hoyer is very effective.  It’s a big stage with a lot going on (in three dimensions) but the story telling is clear.  The audio (the usual 24 bit stereo and DTS-HD Master Audio) and picture on Blu-ray are the usual excellent quality.  The booklet has an insightful conversation between Loy and his dramaturge as well as a detailed track listing and (much needed) synopsis.  Subtitle options are English, German, French, Japanese and Korean. This is really worthwhile lesser known opera.  Loy’s production is intelligent, insightful, funny and full of eye candy.  The performances are all around excellent.  What’s not to like?

As of date of posting this is also available on the OperaVision Youtube channel in 1080p (Blu-ray quality) but only stereo sound of course.