Soundstreams opened their season on Wednesday night at Koerner Hall with a concert of modern music for string orchestra, electronics, percussion and chorus.  The first, and most substantial work, was Paul Frehner’s LEX, being given its world premiere.  It sets diverse texts; quotes from Einstein, Newton’s laws of motion in the original Latin[1}, fragments of the Old testament in Hebrew, extensive passages from Michael Symmons Roberts’ Corpus etc.

Some of the text is delivered straight by one of the soloists; either sung or spoken.  In other places the text is broken up into fragments and allocated to various choir sections.  It’s complex and largely atonal with some particular interesting writing for low strings and percussion.  The Soundstreams Choir 21, the Soundstreams Ensemble and soloists Meghan Lindsay, Rebecca Cuddy, Owen McCausland and Alain Coulombe brought clarity to the complexity under the low key but highly effective baton of Tönu Kaljuste.

After the interval we heard Claude Vivier’s piece for string orchestra Zipangu.  This was accompanied for the first time by a film of dancer Ceinwen Gobert choreographed and directed by Michael Greyeyes.  The music is mostly a series of layers of sonic textures and I think it was helped by the film where Ceinwen seemed to be floating n some kind of ether as she made evolving shapes with her body.

Finally it was time for Arvo Pärt’s Stabat Mater.  It’s pretty typical Pärt in which great technical complexity resolves into a kind of simplicity to the listener’s ear.  I guess it’s one of the most magical things about music that technique is transcended to produce something anyone can listen to.  I wish mathematics worked that way!  Anyway, once more the Soundstreams Choir 21 and Ensemble and Tönu Kaliuste managed the complexities beautifully. 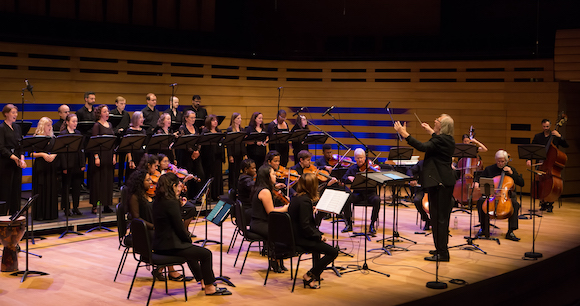 fn1:  I realised last night for all the many, many times I’ve encountered and used Newton’s Laws of Motion in a variety of formalisms I’d never actually seen the original Latin until last night!