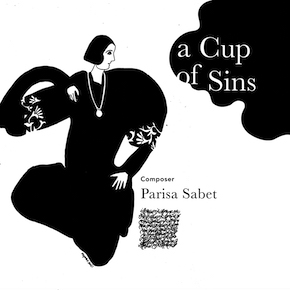 A Cup of Sins is a new CD release of works by Iranian-Canadian composer Parisa Sabet.  If there’s a unifying theme it’s religious/cultural persecution in Iran and there’s a strong Bahai influence.  The six pieces are scored for various combinations of voice, piano and small ensemble and add up to about an hour of very rewarding music.

The first piece, Shurangiz, is a riff on music for the tar (a kind of Iranian lute) and it’s scored for flute, clarinet, piano, violin and cello.  It’s an interesting combination of traditional Iranian influences with a nod to Western minimalism.  It’s quite meditative in mood.

Dance in Your Blood is a a three song cycle for soprano and piano.  The text is by Rumi translated into English by Coleman Barks.  The first part is declamatory and dramatic against a sparse piano riff.  This morphs into something more lyrical and yearning as the poet reflects on his art before becoming repetitive and insistent, mixing various styles of vocal delivery, as the poet demands we dance in joy and adversity (as well a Sufi might!).

Geyrani is a piece for solo violin inspired by Kurdish-Iranian kamancheh virtuoso Kayhan Kalhor.  It’s an intriguing way of making western techniques sound like middle eastern music without requiring the player to do things outside normal (for some value of normal) western techniques.

Maku is a complex setting of fragments from a letter from the Báb(1) to Shah Muhammed of Iran while he was imprisoned in Maku.  It’s a complex piece blending live vocals and instruments with pre-recorded spoken text.  There are many vocal styles used here as well as extended instrumental techniques.  It’s many layered with a kind of wild feel to it.

The Seville Orange Tree is scored for flute and piano.  It uses a lot of extended flute technique to create an atmospheric sound world that floats between the middle east and a kind of jazz/baroque fusion.

The final, and longest piece, on the CD is A Cup of Sin.  It’s scored for voice, clarinet, piano, viola, cello and electric guitar and sets a Farsi poem by Simin Behbahani about sexual violence and trauma.  It’s in three parts.  In the prelude we hear the poem in Farsi (I think – my Farsi isn’t great!) set to a fairly traditional sounding accompaniment.  This is followed by a long main section where the text is given in English translation using a variety of fairly extreme vocal techniques and lots of percussive instrumental technique.  It’s complex, busy and quite abrasive as befits the troubling text.  The postlude is a lyrical vocalise seeming to mirror the Prelude.  This is a very accomplished work.

The recording was made in the Glenn Gould Studio in Toronto in December last year and is clear and balanced.  It’s going to be released on 26th August as a physical CD and as standard resolution FLAC and MP3 downloads as well as the usual streaming services.  The accompanying booklet contains full (English) texts and useful contextual material though there could certainly be more of that.  I ended up doing a fair bit of digging for information about the texts used.

fn1: The Báb is a prophet of the Bahai faith in some ways similar to John the Baptist in Christian tradition.