The basic premise of Kasper Holten’s production of Mozart’s Idomeneo, recorded at the Vienna State Opera in 2019, seems to be that Idomeneo and Elettra are so damaged by their experiences that they must yield limelight and power to Idamante and Ilia.  It’s an interesting idea though one wonders why Ilia is considered to be less traumatized given that her parents and siblings have been slaughtered and her home razed to the ground.  What’s really weird though is that Holten seems to show no sympathy for Idomeneo or Elettra.  Not only are they haunted throughout by particularly grizzly corpses but at the end Elettra goes down to Hades; a trench in the stage inhabited by said grizzly corpses, but she’s followed by Idomeneo.  He is visibly disintegrating mentally in Act 3 and by the time of his resignation speech the crowd is actually laughing at him then, as he goes to embrace Idamante he is intercepted by two men who hustle him off to the grizzly trench.  I’m not sure what Holten is getting at here but, for me, it undermines the sense of resolution that the music implies, as well as its essential humanity. The other feature of this production is the almost complete absence of the sea monster trope. Ilia and Idamante’s scene from the beginning of Act 3 is moved to the start of Act 2 replacing the scene between Idomeneo and Arbace and then there are cuts in Act 3.  The overall result is that the only mention of a monster is in the High Priest’s recit in Act 3 which seems very odd without any real context.  Needless to say no monster appears.  There is a sort of statue in the middle of the stage in Act 3 that collapses at the appropriate moment though it’s not clear that Idamante has anything to do with it.  I suppose that is supposed to be the proxy monster.  OK, the sea monster thing is pretty silly but I’m not sure this a particularly elegant way of dealing with it.  It does though shorten the piece by 15-20 minutes. 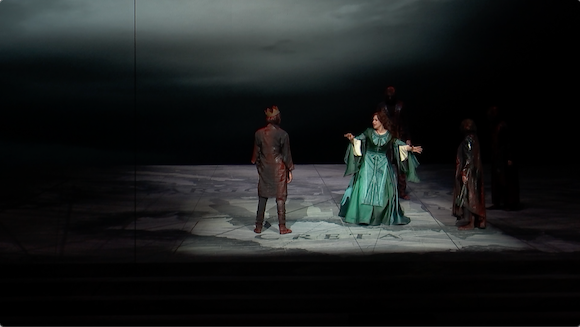 Other aspects of the production are generally well done.  It’s costumed in vaguely 18th century style.  There’s a map of Crete at centre stage with gaming pieces representing the characters on it that gets used in various ways.  At the very start the captivity of Ilia and the Trojans is indicated by the fact that they are actually hanging from the fly loft and only come to ground level to be released.  This makes Ilia’s opening aria that bit more challenging!  There are other elements that might have worked well in the house but are, at the least, tricky on video.  For a start it’s very, very dark much of the time.  There’s also a giant mirror over the stage in Act 3 reflecting the whole stage (I think).  It’s very hard to see what this is about as it only shows occasionally on the video. 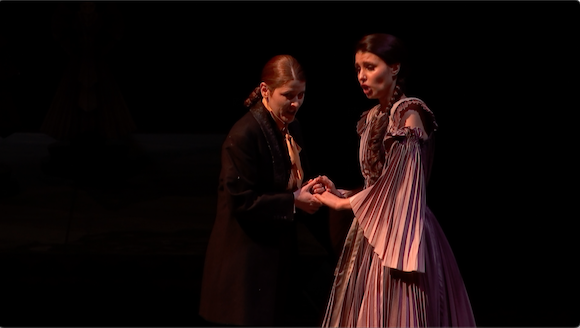 So to the performances.  The stars are unquestionably Rachel Frenkel as Idamante and Valentina Nafornita as Ilia.  Both are fine singers ad actors and work really well together.  Nafornita seems to be a rising star in Vienna and one can see why.  She’s got a really beautiful, flexible instrument, acting chops and looks to match.  Irina Lungu’s Elettra is well sung and convincing but she really only gets to impress vocally right at the end but she makes the most of it.  Bernard Richter, as Idomeneo, does pretty much what he needs to do for this production.  His acting is very good and he is convincing in his disintegration in Act 3.  His singing is also pretty decent but the one big moment; “Fuor del mar” isn’t great.  The runs are pretty approximate and it just lacks drama.  The minor characters, who have less to do than normal because of the cuts, are fine.  Tomás Netopil draws out the details of the score very nicely with excellent support from the house orchestra.  I’m constantly pleasantly surprise by the little details in Mozart’s orchestration, especially the way he blends voice and winds.  That comes over well here. 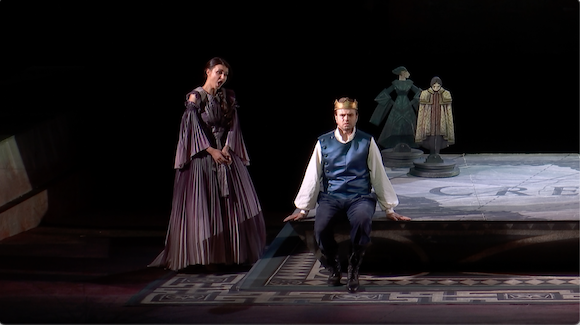 Video direction is in the hands of Jakob Pitzer and Hans Hadulka.  This is a very tough show to film and I think they do a decent job although there is inevitably a loss of the big picture at times.  It’s pretty much impossible to shoot a big dark stage with a few things going on at different places without using a lot of close ups.  All that said, even on Blu-ray this film looks indistinct and murky at times.  I hate to think what the DVD version is like.  The sound though (DTS-HD and stereo) is very detailed and solid though I think there are some odd level changes in Act 3.  Documentation includes an explanatory note, a synopsis and a detailed track listing.  Subtitle options are English, German, Italian, French, Spanish, Korean and Japanese. 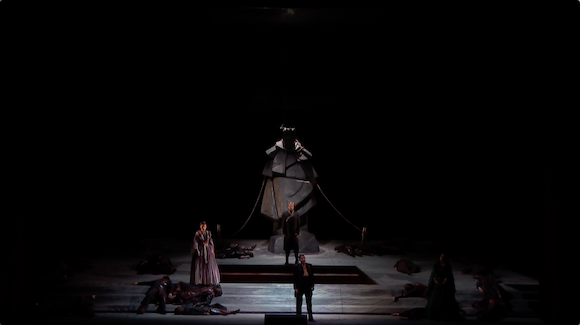 Overall this is a pretty mixed bag.  Holten’s concept ultimately left me disturbed and unsatisfied.  The ending seemed gratuitously cruel (and maybe that’s deliberate).  That rather undermined the fine performances of Frenkel and Nafornita.  Besides, there’s an alternative recent recording; the Robert Carsen production from Madrid.  It doesn’t shy away from the horrors of war but nor does it lose the essential humanity of Mozart’s score.  It’s also extremely good musically and is well recorded. 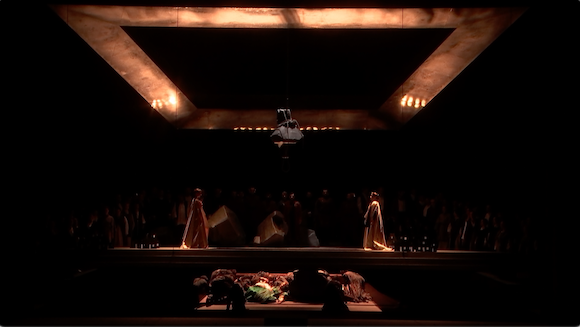